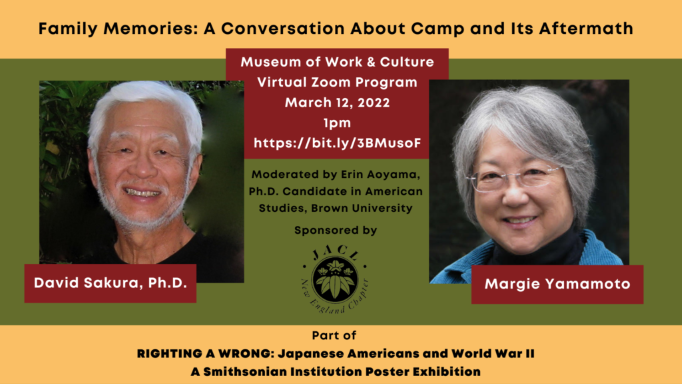 WOONSOCKET, R.I. – Join the Museum of Work & Culture, a division of the Rhode Island Historical Society, on March 12 at 1pm as they host a virtual talk exploring personal stories of Japanese-American internment during World War II.

David Sakura, Ph.D. and Margie Yamamoto will engage in conversation about the experiences of themselves and their families during and after World War II. This program will be moderated by Erin Aoyama, Ph.D. candidate in American Studies, Brown University.

Individuals can register for the talk by visiting: https://bit.ly/mowcfamilymemories

Born in Seattle, WA, Sakura is a third generation Japanese-American (Sansei) whose grandfather was a leader in Seattle’s Japanese community during the early 1900s. After the outbreak of World War II, Sakura’s family was involuntarily detained at Camp Harmony, a temporary detention camp and subsequently transported to Minidoka, a permanent internment camp in Idaho. Since 1980, Sakura has spoken widely to a variety of groups, including college, university and high school students, historical societies, and civic groups.

Yamamoto is retired after more than 40 years in the marketing and communications fields. Before retirement, she was Director of Community Program Initiatives at WGBH, Boston’s public broadcasting station. She has served on the boards of the Japan Society of Boston and the Cambridge Center for Adult Education. Yamamoto has also served on advisory committees for the PBS Adult Learning Service, the Greater Boston Food Bank, and the Institute for Asian American Studies, UMass Boston.

Aoyama is a doctoral candidate in American Studies at Brown University. Her research is rooted in Asian American studies, 20th century American history, relational ethnic studies, and public humanities. Her dissertation takes up questions of race, place, and community repair within the afterlives of Japanese American incarceration and redress.