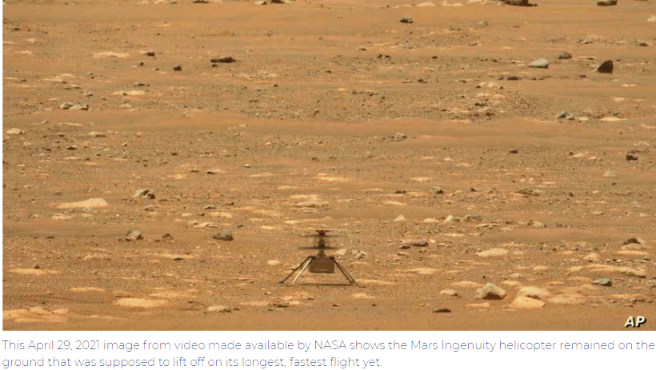 The U.S. space agency NASA said the experimental Mars helicopter Ingenuity, after three successful flights, failed to respond to commands to lift off for a fourth flight Thursday.

Scientists with the Ingenuity team at NASA’s Jet Propulsion Laboratory (JPL) in southern California say a software problem similar to one that delayed the experimental craft’s initial flight 11 days ago prevented the helicopter from transitioning to “flight mode.” The scientists plan to try again Friday.

The 1.8-kilogram aircraft arrived on the planet packed away on NASA’s Perseverance rover when it landed on Mars in February. It was unfolded and dropped from the rover a little more than three weeks ago, and each of the three flights it has made so far have been successively more ambitious.

Ingenuity’s second flight saw it rise to five meters, travel two meters to the east of its position, execute three turns, and return. On its third trip, it rose to five meters and traveled 50 meters, flying at a top speed of about two meters a second.

NASA scientists have planned the fourth flight to be the most ambitious yet. After rising to five meters, they plan to send the helicopter south, switch on its downward-facing navigation camera, and collect images of the surface every 1.2 meters until it travels a total of 133 meters. Ingenuity will then hover, take images with its color camera, and return to its original position.

NASA has scheduled a news conference later Friday to discuss the overall mission.

The space agency describes Ingenuity as a technology demonstration designed to test flight capability in the thin Martian atmosphere. It has specially designed rotors that spin much faster than they would have to on Earth to achieve flight. It also has innovative batteries and solar cells for recharging.