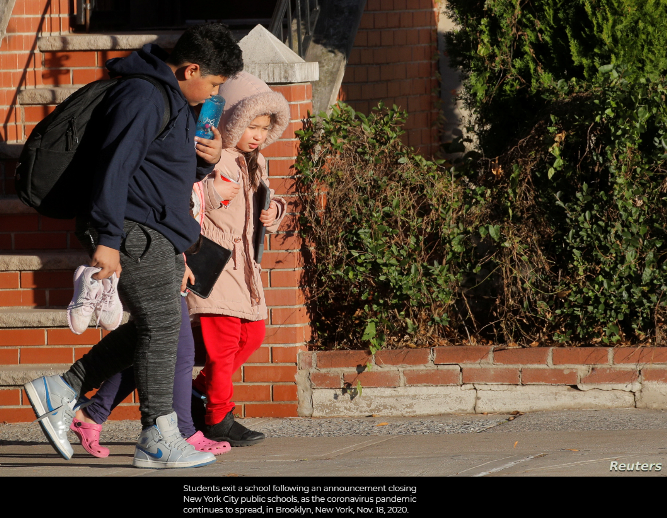 New York City Wednesday ordered schools to close, as the city recorded a seventh-straight day with a COVID-19 positivity rate of over 3%.

“Public school buildings will be closed as of tomorrow, Thursday Nov. 19, out an abundance of caution. We must fight back the second wave of COVID-19,” New York City mayor Bill de Blasio wrote on Twitter.

In-person school resumed for New York children between late September and early October, when the seven-day positivity rate was under 2%.

On Tuesday, the city of New Orleans announced it would cancel Mardi Gras parades in February, as the coronavirus continues to surge in much of the United States.

City spokesman Beau Tidwell told a news conference the celebrations, which were scheduled to take place on Feb. 16, 2021, cannot happen with current limits on outdoor gatherings.

“None of this should be a surprise to anybody,” Tidwell said. “The guidelines have been in place for some time.”

IIn California, Los Angeles has ordered restaurants and bars that have outdoor operations to limit their number of customers to 50% capacity and to close by 10 p.m.  Indoor, nonessential stores can operate at only 25% capacity, while businesses such as hair salons can provide services only by appointment.

The new rules in Los Angeles go into effect Friday. Leaders are also ready to impose a three-week lockdown that would allow people out only for essential trips if the number of new cases and hospitalizations continue to rise. Daily case numbers have more than doubled in the past two weeks.

The White House coronavirus task force warned in a weekly report that there is “aggressive, unrelenting, expanding broad community spread across the country, reaching most counties” in the United States. The surge in cases comes amid worries that the November 28 Thanksgiving Day holiday will further worsen the situation with people traveling and gathering with family and friends.

Also Tuesday, U.S. Senator Chuck Grassley announced that he had tested positive for the coronavirus.

“I’m feeling good + will keep up on my work for the ppl of Iowa from home,” the 87-year-old Senator from Iowa wrote on Twitter, adding that he would continue to quarantine according to CDC guidelines.

AA day earlier, Iowa Governor Kim Reynolds ordered all indoor gatherings to be limited to 15 people, mandated mask-wearing for people who are unable to socially distance from others indoors for more than 15 minutes, and said all restaurants and bars must close by 10 p.m.

“We need some fundamental public health measures that everyone should be adhering to, not a disjointed, ‘One state says one thing, the other state says another thing,’” Fauci told The New York Times, speaking from a virtual press conference.

During the past week, the United States has recorded an average of nearly 150,000 new cases per day, according to Johns Hopkins University. The country has registered more than 11.3 million total cases during the pandemic, the most in the world.

A prescription is required to get the kit, made by Lucira, which the FDA says can provide results in 30 minutes or less. It cautions, however, that a negative test does not preclude a person from infection.

“Making it possible for Americans to do their own rapid COVID-19 self-test at home by prescription is the latest addition to our constantly expanding arsenal of COVID-19 testing options,” Health and Human Services Secretary Alex Azar said in a statement.