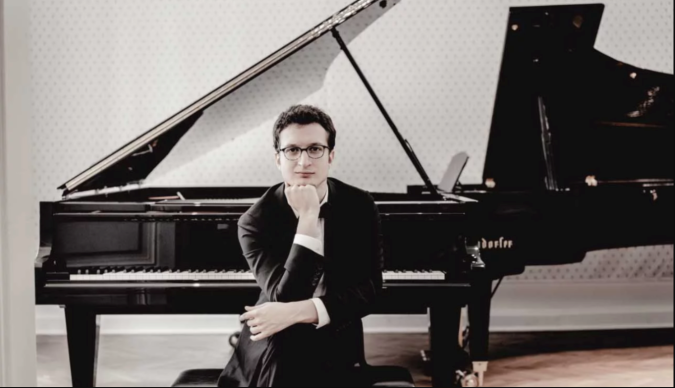 The brilliant 29-year-old, Italian-born pianist, whose career is supported by the Amron-Sutherland Fund for Young Pianists at the Colburn School, is described as “a true sound philosopher” (Oberösterreichische Nachrichten), Rodolfo Leone released his debut album on the Austrian label Gramola in May 2018. The all-Beethoven disc features two pillars of the piano repertoire: the “Hammerklavier” Sonata and the “Waldstein” Sonata. His playing has been described as having “impeccable style” and “absolute technical control” (Il Nuovo Amico).

A native of Turin, Italy, Leone made his orchestral debut in 2013 performing Rachmaninov’s Piano Concerto No. 3 with the Haydn Orchestra of Bolzano and Trento (Italy). He toured Italy with that orchestra the following year performing Shostakovich’s Piano Concerto No. 1. He made his North American debut in 2014 performing Liszt’s Piano Concerto No. 1 with the Toronto Concert Orchestra. Since then, he has performed with, among others, the Vienna Radio Symphony Orchestra and the Colburn Orchestra at Walt Disney Concert Hall, conducted by Stéphane Denève; and recitals at Festival Napa Valley and the Soka Performing Arts Center. He has also performed chamber music with Lynn Harrell, Fabio Bidini, Andrew Schulmann, and the Viano String Quartet.

Up next on April 3, Newport Classical presents a free Community Concert at Miantonomi Memorial Park featuring the award-winning Sinta Quartet in music for saxophone quartet influenced by funk, folk, soul, and minimalism; all with a lyrical tone that fuses with earlier works from the classical canon. From April 29-May 1, Newport Classical presents Cliburn-Bound Piano Marathon, featuring nine exceptional amateur pianists in four concerts, with all proceeds to be donated to the World Health Organization’s Emergency Appeal for Ukraine. On May 13, Newport Classical presents its next Chamber Series concert, featuring harpist Bridget Kibbey and violinist Alexi Kenney, as the two come together for an evening of intimate and finely tuned musicality, from adaptations of the music of John Dowland and J. S. Bach, to masterworks by Camille Saint-Saëns and Sebastian Currier. Finally, on June 3, pianist Daniel del Pino performs Suite Iberia composed by Isaac Albéniz. Five-concert packages are still available for purchase at www.newportclassical.org.

The brilliant 29-year-old Italian-born pianist and first-prize winner of the 2017 International Beethoven Piano Competition Vienna, Rodolfo Leone has been described as “a true sound philosopher” with “impeccable style” and “absolute technical control.” He makes his Newport debut in this virtuosic Romantic program for solo piano.

Programming for the upcoming Newport Classical Music Festival, running from July 1-17, 2022 will be announced on March 29, 2022