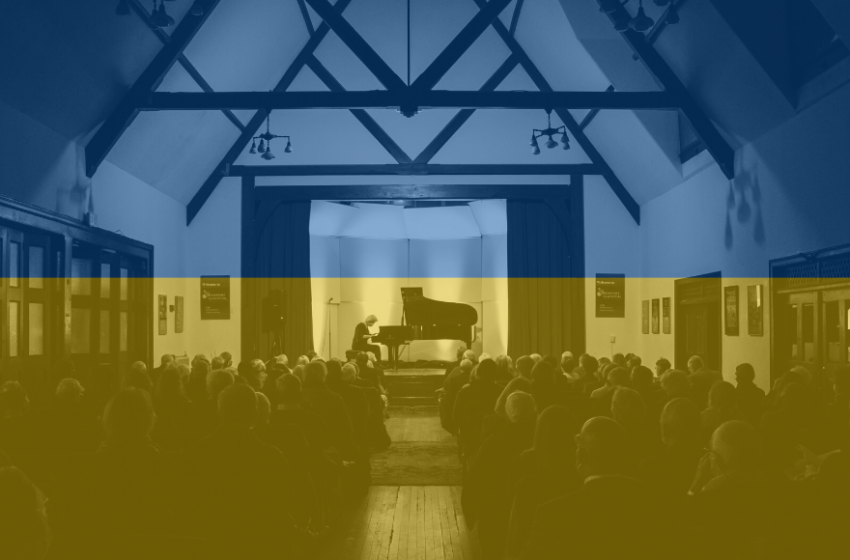 Plus Special Musical Presentation at 7:30pm Concert on April 30 Honoring the Ukrainian People

Newport, RI – Newport Classical announces that all proceeds from its upcoming Cliburn-Bound Piano Marathon, featuring nine exceptional amateur pianists in four concerts from Friday, April 29 through Sunday, May 1, 2022, will be donated to the World Health Organization’s Emergency Appeal for Ukraine. In addition, a special musical presentation in honor of the Ukrainian people will take place during the concert at 7:30pm on April 30. All performances will take place at the Recital Hall at Emmanuel Church (42 Dearborn St.), which will be dressed in yellow and blue for the full weekend.

Keylin says, “I was fortunate to immigrate, as a young child, from St. Petersburg, Russia to the United States. My wife, Yuliya Keylin, is originally from Kyiv, Ukraine. We are now proud US citizens, but our family roots will always have connections to both Russia and Ukraine. We are in utter shock, disbelief and constant grief regarding the continued bloody aggression against millions of innocent people of Ukraine. Music is what brought my wife and I together. We hope and pray that this unnecessary devastation stops immediately. I wish to honor the victims of this horrible suffering, and dedicating this performance to them is the least I can do. “

“On behalf of the Board of Directors, we are proud to offer a presentation in honor of the Ukrainian people and believe we can use the power of music to be a leader for this important cause in the Newport community,” says Newport Classical Board President Suzanna Laramee.

In addition to all ticket sales supporting the delivery of urgent healthcare to people across Ukraine and refugees in neighboring countries affected by this crisis, patrons are welcome to make additional contributions directly by visiting: https://gogiveone.donorsupport.co/-/NRBWZZZT

Since his New York Carnegie Hall début at age 11, Grammy Award-nominated violinist Misha Keylin has continued to earn critical and audience acclaim for his exuberant musicality, keen interpretive insight and rare tonal beauty. Noted for a wide range of repertoire, Keylin attracted particular attention with his world-premiere four CD series, featuring all seven of Henry Vieuxtemps’ Violin Concertos and showpieces with orchestra, released on the Naxos label. These recordings have sold over 150,000 copies worldwide and have garnered numerous press accolades and awards. Misha Keylin began musical studies with his mother in St. Petersburg, Russia. He immigrated to the USA at nine and was immediately accepted as a student by the legendary Dorothy DeLay at The Juilliard School. His performance career has spanned 50 countries and five continents.

The Cliburn International Amateur Piano Competition brings together the best amateur pianists from around the world, and is hailed by The Boston Globe as, “a celebration of music, and the people who have to make music no matter what.” Four of the performers playing during Newport Classical’s Cliburn-Bound weekend are on their way to this year’s competition, taking place in Fort Worth, Texas in October.

Up next on April 3, Newport Classical presents a free Community Concert at Miantonomi Memorial Park featuring the award-winning Sinta Quartet in music for saxophone quartet influenced by funk, folk, soul, and minimalism; all with a lyrical tone that fuses with earlier works from the classical canon. The brilliant 29-year-old Italian-born pianist and first-prize winner of the 2017 International Beethoven Piano Competition Vienna Rodolfo Leone will present a program of Brahms and Schumann for his debut in Newport on April 22. On May 13, harpist Bridget Kibbey and violinist Alexi Kenney come together for an evening of intimate and finely tuned musicality, from adaptations of the music of John Dowland and J. S. Bach to masterworks by Camille Saint-Saëns and Sebastian Currier. On June 3, pianist Daniel del Pino performs Suite Iberia composed by Isaac Albéniz. The complete spring schedule is available at www.newportclassical.org.

Programming for the upcoming Newport Classical Music Festival, running from July 1-17, 2022 will be announced on March 29.