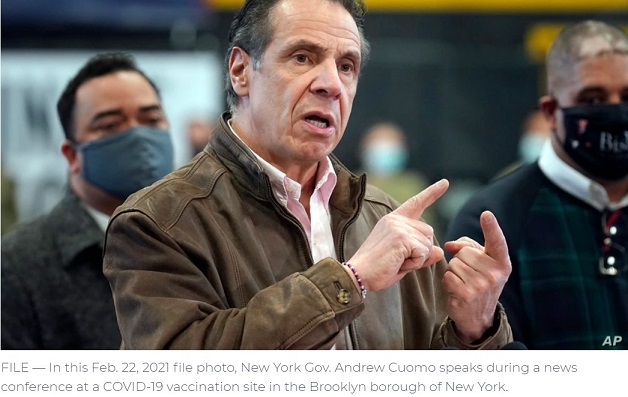 WASHINGTON – For weeks early last year, one U.S. state governor, New York’s Andrew Cuomo, stood out for his adept handling of the coronavirus pandemic as he shut down nonessential businesses in the state to prevent the spread of the virus and at daily nationally televised news conferences attacked the federal government’s halting response.

The three-term, 63-year-old Democratic governor was viewed as a role model for forthright leadership amid a crisis.

As a result, by mid-year, as the virus passed quickly throughout the U.S., he was able to declare that New York, the fourth biggest U.S. state with 19 million residents, “went from the worst situation in the nation or frankly the world … and we brought the spread down dramatically.”

Now, however, Cuomo is facing twin crises of his own making — accusations of downplaying the pandemic in New York’s nursing homes and sexually harassing two young women on his staff — sharply undercutting his upstanding image and seriously calling into question how long he may last in office.

He is accused of dramatically under-reporting the number of COVID-19 deaths among long-term care residents at nursing homes in the state. The figure is now 15,000, up from the 8,500 previously disclosed.

A top Cuomo aide told state lawmakers that officials feared that the information was “going to be used against us” by possible federal investigations originating at the Justice Department under the administration of former President Donald Trump, long a Republican political rival of Cuomo’s.

Now, multiple news accounts say Justice is indeed investigating the death toll even as a Democrat, President Joe Biden, a political ally of Cuomo’s, has assumed power in Washington.

In the second instance, Cuomo is facing allegations that he has sexually harassed two women working for him in the governor’s office.

State lawmakers, including some Democratic colleagues of Cuomo’s, have called for his resignation and investigations after both the revelations of the increased nursing home death toll and his unwelcomed comments to the women.

One of the women, Lindsey Boylan, a former state economic development official, alleged that he harassed her on several occasions from 2016 to 2018 and, unsolicited, kissed her on the lips at his New York city office, an allegation Cuomo denied.

The other woman, Charlotte Bennett, a 25-year-old former aide to the governor, accused him of sexually harassing her last year. She told the New York Times that the governor asked her about her sex life and whether she had ever had sex with older men.

“I understood that the governor wanted to sleep with me, and felt horribly uncomfortable and scared,” Bennett told the newspaper. “And was wondering how I was going to get out of it and assumed it was the end of my job.” She left her state job in November.

Asked Monday about the sexual harassment allegations against Cuomo, White House press secretary Jen Psaki said that Biden believes “every woman coming forward should be treated with dignity and respect.” Psaki added, “That applies to Charlotte, that applies to Lindsey,” referring to both of Cuomo’s accusers.

Cuomo on Sunday acknowledged that he may have made inappropriate comments to Bennett that could “have been misinterpreted as an unwanted flirtation.”

The governor said his comments were a part of his work life, where he sometimes “teased people about their personal lives and relationships.”

“I now understand that my interactions may have been insensitive or too personal and that some of my comments, given my position, made others feel in ways I never intended,” Cuomo said in a statement. “I acknowledge some of the things I have said have been misinterpreted as an unwanted flirtation. To the extent anyone felt that way, I am truly sorry about that.”

Cuomo said he would allow the state attorney general, Letitia James, to appoint whomever she wanted to investigate the harassment allegations against him and grant that person subpoena powers for witnesses.