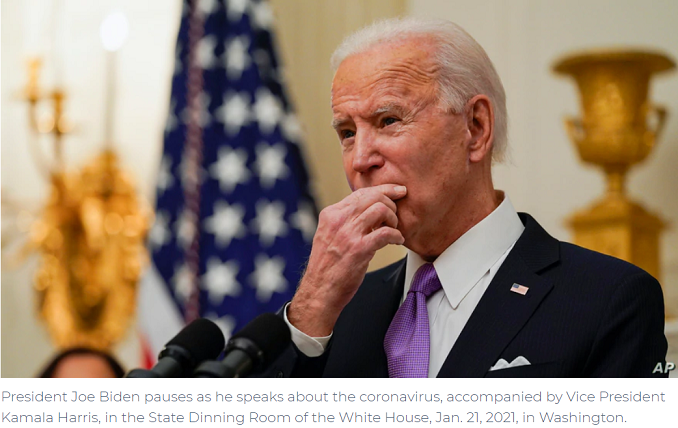 WASHINGTON – Less than one week into the administration of President Joe Biden, much of the talk in Washington is focused on the dysfunction on Capitol Hill, a spate of executive orders from the new president, and the looming impeachment trial of former President Donald Trump. None of the three bodes well for bipartisan cooperation so pessimism might seem justified.

However, when experts look at the major policy areas that Biden identified in last week’s inaugural address, there are at least some areas where agreement across the aisle is a real possibility.

The Biden administration came out of the gate with a request for $1.9 trillion in spending on various programs related to the coronavirus pandemic, including major economic stimulus spending and a large investment in federal infrastructure to get the vaccine to as many Americans as it can, as quickly as it can.

Republicans on Capitol Hill were quick to label the proposal “dead on arrival” because of its price tag, but some observers believe their initial reluctance might be overcome by the reality of the country’s economic situation.

“I think that even though people are calling it dead on arrival, there’s a lot in this bill that’s probably going to make it,” said Howard Gleckman, a senior fellow in the Urban-Brookings Tax Policy Center. Few lawmakers, he said, are going to want to stand in the way of programs meant to get people inoculated against the virus, and while there will probably be some arguing about the size of stimulus payments, the popularity of that part of the proposal will make it difficult to kill off entirely.

On tax policy specifically, Gleckman believes there is considerable bipartisan agreement on a number of proposals that might turn up in the relief package or a follow-on bill. There is support for expanding the tax credit that filers receive for children under their care and for expanding the Earned Income Tax Credit to childless workers.

Gleckman said that Biden’s Made In America tax credit, meant to spur domestic manufacturing, will also likely have bipartisan support.

As with trade policy, Biden will confront a GOP that has made a sharp change of course on matters of immigration over the past several years. The Republican establishment had, for decades, been largely supportive of immigration, seeing it as a driver of economic demand and a source of lower-cost labor.

That began to change even before Trump, but the party took an even more aggressive anti-immigration stance under the former president.

However, Sarah Pierce, a policy analyst with the Migration Policy Institute in Washington, believes there are still a number of pro-immigration Republicans who have been silent during the Trump years, but who could support some of the changes Biden is proposing.

For example, the Biden proposal would seek to streamline and expand the process for bringing skilled workers into the country — a move that could earn support from Republicans with ties to the business community.

Those less enthusiastic about immigration might support other initiatives, such as a proposal to allow the Department of Homeland Security to vary the number of green cards issued each year depending on economic conditions.

“This is actually something that the Migration Policy Institute has been advocating for years, because it doesn’t make sense that our immigration [volume] is set by law,” Pierce said. “It should be flexible and maintain a relationship with market conditions within the United States.”

Another Biden proposal, to increase the wages paid to temporary workers, could appeal to some who have opposed guest worker programs on the theory that migrant labor tends to drive down the wages of competing U.S. workers.

Potential bipartisan agreement on immigration reform has limits, however. Biden’s most ambitious proposal, an eight-year path to citizenship for millions of undocumented immigrants, mirrors efforts that withered and died in Congress during both the former Obama and George W. Bush administrations.

With the exception of a few outliers, Republicans in the House and Senate oppose most of the major climate initiatives that Biden and the majority of the Democratic Party are advocating. The announcement that on his first day in office Biden had recommitted the U.S. to the Paris Climate Agreement, for instance, was met with angry denunciations from multiple Republican members of Congress.

However, the GOP’s objections to dealing with climate change are regularly overridden when they conflict with national security interests, said Erin Sikorsky, deputy director of the Center for Climate and Security.

“In the past four years, you’ve actually seen that the House and Senate have passed pragmatic climate security legislation, usually through the National Defense Authorization Act each year, and so I think that’s definitely an area where the Biden administration can find bipartisan consensus with Congress,” she said.

This will be cold comfort to most environmental activists, however, as the measures are largely reactive rather than proactive, including steps like making military bases more resistant to extreme weather and funding programs that allow climate scientists to interact with the intelligence community.

The debate over trade has shifted dramatically in the four years since Joe Biden last served in the White House as vice president. Under Trump, the GOP radically reshaped its position on trade, following the former president’s lead by supporting tariffs and protectionism. That, perhaps surprisingly, makes trade one of the areas ripest for bipartisan cooperation.

“Trade is an issue on which, in terms of actual policy, the incoming Biden administration is closer to Trump than on most other, or maybe nearly all other, issues,” said Gary Hufbauer, a senior fellow at the Peterson Institute for International Economics.

Within the Biden administration, he said, the prevailing view is that “the goal of trade should not be foremost to follow the law of comparative advantage and try to enlarge two-way commerce, but rather to advance labor, environmental and human rights and, as needed, protect jobs.”

Biden has appointed Katherine Tai, a trade attorney who speaks Mandarin and has a history of challenging the trade practices of the Chinese government, as U.S. Trade Representative. Her past support for tough-on-China policies has earned her bipartisan support in Congress. Early indications also suggest that the Biden administration may believe, as many trade economists do, that the center of power in international trade has moved away from the World Trade Organization and toward a network of individual trade agreements, many of them bilateral.

A lingering question will be the U.S. position with regard to the Comprehensive and Progressive Agreement for Trans-Pacific Partnership (CPTPP), a pact that creates a massive free trade zone in the Pacific region. Trump withdrew the U.S. from the accord, which had been largely negotiated by the Obama administration, a move that was supported by many Democrats.

However, now the United Kingdom and China are both looking to join the CPTPP. The participation of two more major U.S. trading partners in the accord — and especially China — may leave Biden’s team wondering whether it wouldn’t be preferable to have a seat at the table as a counter to Chinese influence.