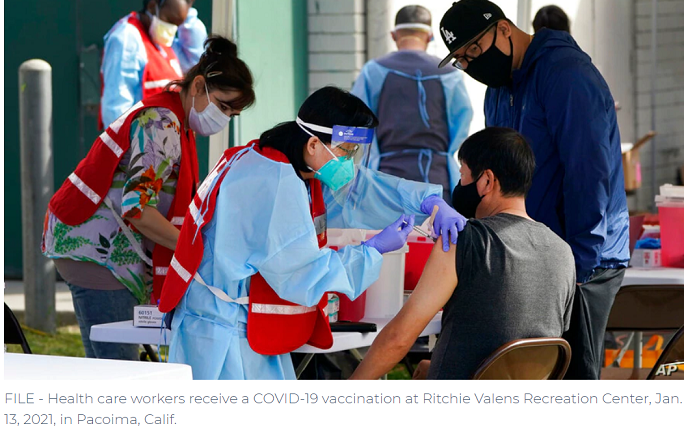 “All of us in public health had been asking for a plan from the Trump administration,” noted former Baltimore health commissioner Leana Wen, a public health professor at The George Washington University. “What a big difference it would have made for our country if this plan had existed months ago.”

On the other hand, “This is not some genius idea that (the Biden administration has) come up with,” noted Ashish Jha, dean of the Brown University School of Public Health. “It’s literally basic public health. And it only seems genius because the last team just did nothing.”

Now that a long-overdue plan is in place, the public expects results. Three thousand people die of COVID-19 each day on average, according to data from Johns Hopkins University; much of the economy has been shut down for nearly a year, and the virus is mutating into more transmissible forms.

Whether Biden’s plan succeeds or fails will ultimately be judged by whether fewer people die of COVID-19. But some factors are beyond the administration’s control, like whether the new, faster-spreading variants already in the country take over.

Biden’s original plan was to deliver 100 million vaccine doses in his first 100 days in office.

“They cannot be setting a low bar for themselves and for the country,” Wen said. “This is the time for bold action.”

But there may be limits to how much the process can speed up. The Moderna and Pfizer-BioNTech vaccines require special manufacturing processes.

However, Biden told reporters Monday that manufacturers have agreed to do more.

“I think with the grace of God and the goodwill of the neighbor and the creek not rising, as the old saying goes, I think we may be able to get that to … 1.5 million a day, rather than 1 million today,” he said.

Biden will also need to straighten out a vaccine distribution program that is behind schedule and fraught with complications.

As of Monday, just over half of the doses distributed to states had been administered to patients. Many patients seeking shots have struggled to navigate overwhelmed phone lines and websites. Health centers are finding it hard to plan vaccination drives because they don’t have reliable information on how much vaccine will be available or when. Some have had to cancel vaccination appointments because they did not receive the doses they expected.

Testing shortages, backlogs and delays have been problems in the United States since the beginning of the pandemic.

The Biden plan calls for scaling up testing. It does not set a target, but Jha said he would like to see the numbers double in the next month or two.

And tests should be conducted in many more places than they are now, he added, including schools and workplaces, as localities try to reopen.

“If it’s a couple of days old, that person’s already interacted with tons of other people” and has potentially spread the virus, she noted. Some areas are still experiencing delays a year into the pandemic.

Another key factor is how quickly people who test positive can be isolated.

“That’s a very basic question, but very few places in the country can answer that,” said  Tom Frieden, former director of the Centers for Disease Control and Prevention, and CEO of the global health nonprofit Resolve to Save Lives.

Collecting this and other data will be a challenge, he said. The nation’s fragmented health care system means information is scattered among different providers, hospitals and government agencies.

Scaling up the COVID-19 response will mean hiring more people. Local health departments have lost about 16% of their full-time workers since 2008, according to NACCHO.

Public health systems have suffered from chronic underfunding, Wen said, “which we have really seen come to roost during the pandemic where we just didn’t have the ability to scale up.”

Local health departments need the help, but not just for COVID-19. It’s not clear what would happen to the new hires after the pandemic is over.

“This crisis is the largest that any of us has ever tried to face,” she said, but “it’s not going to be the last.”

Biden will need Congress to pay for the new workers. The Democratic Party-controlled House of Representatives passed a bill last year that included the workforce increase, but the Republican-led Senate did not take it up. Biden’s new $1.9 trillion coronavirus relief bill includes the measure, but the bill’s fate is unclear.

Experts want to see rates of mask-wearing increase under Biden. Not wearing a mask became a political act under former President Donald Trump. Polls have found Republicans less likely than Democrats to wear them, even though masks have been shown to reduce the spread of the virus.

Biden has ordered people to wear masks on federal property and on interstate transportation, including planes, trains and buses. He is asking the American public to wear masks for his first 100 days, but says he lacks the authority to order it nationwide.

Governors can. But 13 states do not have mask mandates, according to Masks4All.co.

In many areas, health care workers still have to reuse N95 masks and other personal protective equipment that was intended to be single-use.

Biden has invoked the Defense Production Act to order companies to increase essential supplies to combat the pandemic, including masks, gloves and other personal protective equipment.

Trump also had invoked the act, but supplies still lag.

Wen said the American people will be watching to see if the Biden administration delivers on its pledges. The president is asking people to make sacrifices while the pandemic rages, keeping businesses closed and discouraging gatherings with friends and family.

“If that’s the case, we need to see them also taking on the hard challenges too,” Wen said.