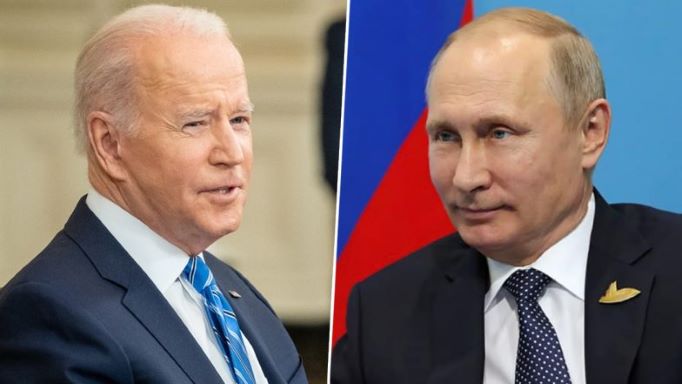 WASHINGTON –U.S. President Joe Biden and Russian President Vladimir Putin are scheduled to have a telephone conversation Saturday as tensions continue to grow amid concerns that Russia is ready to mount an invasion of Ukraine.

Washington has received intelligence reports that the invasion could happen as early as Wednesday.

The U.S. Embassy in Kyiv has begun evacuating its staff. In addition, the State Department has issued a travel advisory warning people not to travel to Ukraine “due to the increased threats of Russian military action” and advised “those in Ukraine should depart immediately.”

A few U.S. diplomats are expected to be relocated to far western Ukraine, near Poland, a NATO ally, a move that would allow the U.S. to maintain a “diplomatic presence” in Ukraine.

Russian foreign ministry spokeswoman Maria Zakharova said on Saturday that Moscow has decided to “optimize” its diplomatic staff numbers in Ukraine, citing fears of “possible provocations from the Kyiv regime.”

Zakharova did not describe the move in detail but said the embassy and consulates in Ukraine continued to perform key functions.

Also Saturday, Britain told its nationals to leave Ukraine, and German and the Netherlands told its citizens to leave as soon as possible.

Before the two leaders talk Saturday, however, Putin will talk with French President Emmanuel Macron, with whom Putin met earlier in the week.

Earlier Saturday, U.S. Secretary of State Antony Blinken said he would also speak with his Russian counterpart, Sergey Lavrov, on Saturday about what appears to be Russia’s imminent invasion of Ukraine.

Blinken, speaking at a press conference in Fiji, said if Putin “decides to take military action [against Ukraine] we will swiftly impose severe economic sanctions in coordination with allies and partners around the globe, will bolster Ukraine’s ability to defend itself, we will reinforce our allies on the eastern flank. I’ll underscore this unity and result when I speak with Russian Foreign Minister Lavrov later tonight.”

White House national security adviser Jake Sullivan said Friday that a Russian invasion of Ukraine could begin “during the Olympics” or when Putin decides to order it.

Many analysts have said that Russia is unlikely to carry out any invasion before the Winter Olympics in China end February 20.

Russia now has enough forces on Ukraine’s border to conduct a major military operation, Sullivan said, and Russia could seize “significant territory” in Ukraine, including the capital, Kyiv, in an attack.

On Friday, Biden took part in a secure video call with world leaders to discuss Ukraine.

“The leaders agreed on the importance of coordinated efforts to deter further Russian aggression against Ukraine, including their readiness to impose massive consequences and severe economic costs on Russia should it choose military escalation,” according to a White House statement. In addition to Biden, the call included the leaders of Canada, France, Germany, Italy, Poland, Romania, Britain, NATO, the European Union and the European Council.

A senior U.S. defense official told reporters that Biden has ordered an additional 3,000 soldiers to Poland in addition to the 1,700 already headed there. The Pentagon said the troops are being deployed to reassure NATO allies and deter any potential aggression against NATO’s eastern flank.

The Pentagon announced last week the deployment of the previous 1,700 troops to Poland along with 300 troops who were to be moved from the United States to Germany. It also announced at that time that 1,000 troops already based in Germany were to be redeployed to Romania.

Speaking Friday with several of his counterparts in NATO countries, U.S. Defense Secretary Lloyd Austin said the United States stands “united with our NATO Allies to deter and defend against any aggression,” according to a Pentagon statement.

Blinken “underscored that any and all aggression against Ukraine by Russia will be met with swift, severe and united consequences,” State Department spokesperson Ned Price said.

The comments by the U.S. led to the biggest drop in Russia’s ruble in nearly two years. The ruble was down 2.8% Friday, set for its largest daily percentage drop against the dollar since March 2020.

Earlier Friday, Blinken warned of a possible Russian attack on Ukraine at “any time” and urged U.S. citizens to leave the Eastern European country immediately.

He made his comments after meeting in Australia with leaders of the so-called Quad countries — the United States, Australia, Japan and India.

Blinken’s warning also came one day after Biden urged Americans to leave the country immediately and warned in an interview with NBC News of a potential major conflict with Russia should a clash erupt between U.S. and Russian troops.

On Thursday, Biden said, “We’re dealing with one of the largest armies in the world. This is a very different situation, and things could go crazy quickly.”

The U.S. president said he would not send troops to Ukraine, even to rescue Americans in case of a Russian invasion.

“That’s a world war. When Americans and Russians start shooting one another, we’re in a very different world,” he said.

Russia opened 10 days of massive military drills in Belarus on Thursday and docked six of its ships at a strategic Black Sea port, drawing a sharp rebuke from Ukrainian officials, who characterized Moscow’s actions as further escalating tensions in the region.

The Russian maneuvers in Belarus involved thousands of troops and sophisticated weapons systems, such as S-400 surface-to-air missiles, Pantsir air defense systems and Su-35 fighter jets, with some of the training just 210 kilometers north of the Ukrainian capital, Kyiv.

Officials in Moscow and Minsk have said Russian troops will withdraw from Belarus sometime after the drills end February 20. But Western officials remain fearful they could be deployed in a Russian invasion of Ukraine, a onetime Soviet republic, along with 100,000 troops Moscow has amassed along Ukraine’s eastern flank.

Russian officials have denied they plan to invade Ukraine, but diplomatic talks with Western officials have led to a standoff. Russia has demanded that the United States and its allies reject Ukraine’s bid for membership in NATO.

The West has rejected that as a nonstarter but has said it is willing to negotiate with Moscow over missile deployment and troop exercises in Eastern European countries closest to Russia.

Western governments have been calling on Russia to take steps to de-escalate the crisis and have vowed to impose swift and severe economic sanctions if Russia invades Ukraine.

Some information in this report came from The Associated Press, Agence France-Presse and Reuters.