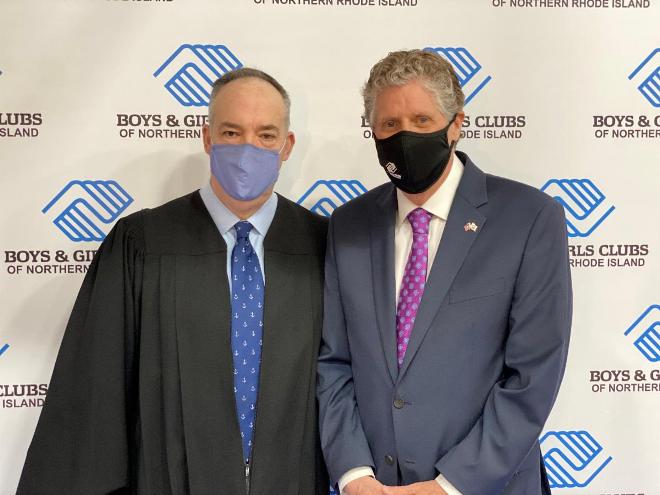 “David is an honest, fair and thoughtful leader who brings decades of legal and government experience to the bench,” said Governor Dan McKee. “From his days at the Boys & Girls Club, all the way to the Rhode Island Superior Court, David has always been a person of integrity with a passion for his community. I know he will serve our state well.”

“I am honored to have been nominated and confirmed to the Rhode Island Superior Court and I look forward to continuing to serve the public in this new capacity,” said Cruise. “Being sworn-in by Governor McKee at the Boys & Girls Club brings my life and career full circle. Growing up, the Governor and I both spent many days at the Boys & Girls Club – it is a privilege to take my oath at the place where it all began for me.”

Cruise, of Cumberland, has been an attorney since 1991. He recently returned to independent private practice after serving as Senior Advisor and Director of Legislative Affairs to Governor Gina Raimondo. Prior to serving in the Governor’s Office, Cruise was an Administrative Magistrate with the Rhode Island Traffic Tribunal, Chief of Staff to the Rhode Island Senate and Legal Counsel to the Rhode Island Resource Recovery Corporation.

In 1993, President Bill Clinton appointed Cruise as Director of the Office of Intergovernmental Affairs, Office of the Secretary of Commerce. In 1991, Governor Bruce Sundlun selected Cruise as Chief of Staff. Prior to that, Cruise served as Deputy Chief of Staff for Rhode Island Lieutenant Governor Thomas DiLuglio. In 1984, the constituents of Rhode Island State Senate District 33 in northern Rhode Island elected Cruise to the first of four consecutive terms. In 1976, Cruise became the youngest elected official in the history of the State of Rhode Island, being elected to the Cumberland Town Council at age 19, and later ascending to Town Council President. He earned his bachelor’s degree from Providence College and his law degree from Suffolk University School of Law.

Cruise has been a lifelong, dedicated member of the Boys & Girls Club.

“It is an honor that David has chosen the Boys & Girls Clubs of Northern Rhode Island’s Cumberland-Lincoln Clubhouse for his swearing in ceremony,” said Gary Rebelo, Boys & Girls Clubs of Northern Rhode Island President & CEO. “A member since childhood, David has been a lifelong advocate and friend of the Club. David’s accomplishments are truly an example of our motto ‘Great futures start here.’ We congratulate him today and wish him continued success.”

The Rhode Island Superior Court is comprised of 22 judges and 5 magistrates. It is the forum for jury and non-jury trials of both civil and criminal matters. The court has original jurisdiction in all felony proceedings, in civil cases where the amount in controversy exceeds $10,000, and in equity matters.