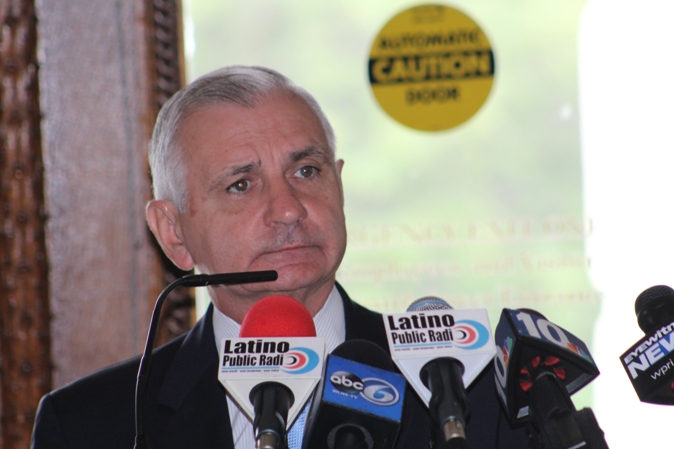 “This bill will help repair and upgrade Rhode Island’s roads, bridges, and key infrastructure,” said Senator Reed. “It provides increased funding for vital transportation, housing, and economic development programs throughout the state, including a major increase in transportation dollars for RIDOT.  I am confident the state will use this new funding to upgrade our infrastructure, improve mobility, and enhance economic opportunity and smart growth across the state.”

The Omnibus Appropriations bill provides funding for the U.S. Department of Transportation (DOT), the U.S. Department of Housing and Urban Development (HUD), and other related agencies that manage many of the programs that build and maintain our nation’s transportation network and support housing and economic development in our communities.  Overall, the bill provides a total of $86.7 billion in transportation budgetary resources and $60.3 billion in budget authority for HUD programs.

As a result of Reed’s committee leadership, Rhode Island will receive a significant boost in transportation, housing, and economic development funding.  Reed says the state should receive an estimated $300 million for roads and highways, $60 million for bridges, and over $45.3 million for public transportation.

“Improving our roads, bridges, and public transportation is a smart investment that connects people and communities to opportunity.  This bill will help reduce congestion while boosting economic growth, expanding commerce, and enhancing safety and mobility by shoring up crucial infrastructure,” said Reed.

And Senator Reed, who delivered over $21.7 for T.F. Green Airport in the CARES Act included an additional $5.1 million in Federal Aviation Administration (FAA) funding for the airport as well as over $420,000 for rent relief for concessionaires who’ve been hit by the lack of air travelers, for a total of $5.5 million.

The bill also includes big ticket transportation items like $1 billion for Better Utilizing Investments to Leverage Development (BUILD) grants, previously referred to as Transportation Investment Generating Economic Recovery (TIGER) grants.  Since 2010, Rhode Island has been awarded over $175 million in competitive TIGER/BUILD grants, including a $21.3 million grant awarded this fall to upgrade a key stretch of Route 37/I-295.

In the COVID-19 relief portion of the bill, Reed also successfully steered $2 billion in federal grants to the motor coach, school bus, and domestic passenger vessel industries.  This provision was based on Reed’s bipartisan legislation, the Coronavirus Economic Relief for Transportation Services (CERTS) Act (S.4150).  This provision will protect an important link in the nation’s transportation network that has a major economic impact and employs nearly 90,000 Americans.

Senator Reed noted that RIPTA is not in line for another major infusion of federal funds from the COVID-19 relief section of the bill.  This is due to the fact that Senator Reed already delivered $124 million for RIPTA in the section of the CARES Act he helped shape and pass in March, and which represents over 102 percent of RIPTA’s annual operating expenses.  Federal transit funds were directed to help other states that received a much lower percentage of federal dollars reach up to 75 percent of their operating expenses.  RIPTA will receive an additional $578,000 in rural transit program funding, bringing the state’s rural allocation to 125 percent of its annual 2018 operating expenses.

The bill rejects the President Trump’s proposal to eliminate CDBG, a critical funding source for state and local community and economic development, and instead includes $3.475 billion for the program.  Senator Reed estimates this will result in approximately $17 million for Rhode Island in fiscal year 2021.  CDBG funding can be used to address a variety of needs, from revitalizing distressed areas to supporting small businesses, removing blight, or assisting seniors with home repairs.

The bill provides $1.35 billion for the HOME program, which helps states and local governments to increase housing affordability through the building, buying, or rehabilitating of affordable housing that is then made available for rent or homeownership.  Senator Reed estimates Rhode Island will receive about $6.3 million under this program.  The majority of Rhode Island’s allocation is used to support existing rental housing assistance units. Without this increase in funding, nearly 50 families would have lost their rental assistance, or the state would have been forced to carry the financial burden.

To help prevent and end homelessness, the bill includes $3 billion for homeless assistance programs to build on and improve HUD’s delivery of housing and supportive services for people currently experiencing or at risk of homelessness. These funds address particularly vulnerable populations, including veterans, youth, and survivors of domestic violence.  This includes $290 million for Emergency Solutions Grants, $82 million for targeted resources for youth experiencing homelessness, and $52 million for new rapid rehousing projects, which will serve survivors fleeing domestic violence.

To address lead-based paint hazards in low-income housing, the bill provides $360 million for grants from the Office of Lead Hazard Control and Healthy Homes.  This level of funding includes $278 million for traditional lead hazard reduction grants, with no less than $95 million reserved for those communities with the highest lead-based paint abatement needs, such as the heavily-impact communities in Rhode Island.  The bill provides legislative flexibility for current participants in the High Impact Demonstration grant program by removing limiting eligibility requirements for lead remediation activities at Rhode Island Housing’s request, allowing the state to more effectively execute the program, remediate more units, and provide a greater number safe homes Rhode Island families.

“This bill should have been done months ago and Republican obstruction and delay has proved costly.  Households and business are struggling, infection rates are soaring, and an increasing number of small businesses are in danger of permanent closure.  This emergency pandemic aid will help people make ends meet and stabilize the economy as we work to get the infection and hospitalization rate back under control.  Going forward, we need Republicans to commit to putting the nation’s interest ahead of partisan goals.  We need folks to be responsible: wear a mask, practice social distancing, and look out for one another.  That includes members of Congress,” concluded Reed.

Once it is signed, this Omnibus Appropriations law will keep the federal government funded through September 30, 2021.