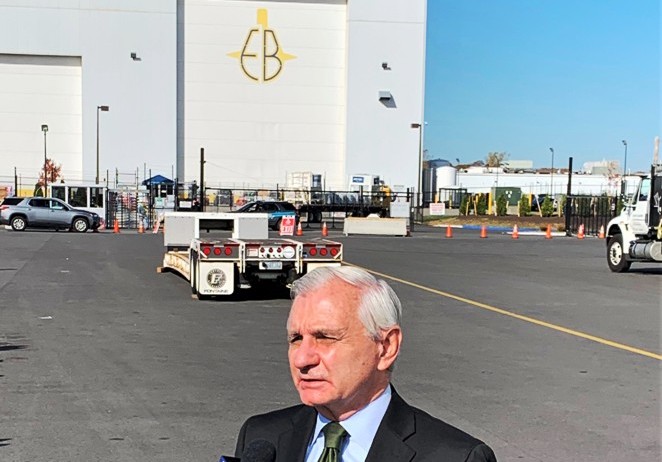 At 560 feet long with a submerged displacement of nearly 21,000 tons, the submarines of the Columbia-class will be the largest ever built by the U.S.

The Ranking Member of the Armed Services Committee, Reed worked for over a decade to make this program possible and included language in the latest stopgap government funding law to keep the awarding of the shipbuilding funds on track

NORTH KINGSTOWN, RI – The enormous black cylinders that begin to take shape in the cavernous manufacturing production facilities at Quonset Point provide the United States with an unparalleled strategic deterrent that helps safeguard the nation and provides the U.S. Navy with an unmatched advantage beneath the waves.

Thousands of Rhode Island workers make critical contributions to designing, engineering, and building these next generation submarines.  And now, thanks to a new $9.474 billion Navy contract awarded to General Dynamics Corp, the parent company of Electric Boat, work will commence on full-scale production on the first of a 12-ship class of ballistic-missile submarine (SSBNs) in the Columbia-class.

U.S. Senator Jack Reed (D-RI), the Ranking Member of the Armed Services Committee and a senior member of the Appropriations Subcommittee on Defense, has worked for over a decade to reach this milestone.  Today, Reed gathered with officials at Electric Boat’s facilities in Quonset Point to celebrate the award, which will enable Electric Boat’s Quonset Point workforce to transition from advance construction activities to full-scale production of the future USS Columbia (SSBN-826).  Reed also pledged to continue working to secure federal funding for advance construction activities on a second ship, the future USS Wisconsin (SSBN-827).

Senator Reed noted the awarding of the contract, officially signed last night, is a major win for Rhode Island’s workforce and will provide added stability for the Ocean State’s industrial base while also achieving cost savings for taxpayers through production efficiencies.

“The awarding of the contract for the first Columbia-class submarine is an important victory – for Rhode Island’s workforce, for Electric Boat and the entire supply chain, and for the Navy,” said Senator Reed, who helped launch the Columbia-class Submarine Program in May of 2008 when he led efforts to secure $15 million for Electric Boat for the Sea Based Strategic Deterrent/Undersea Launched Missile Study (SBSD/ULMS).  This research and development initiative helped define the next generation of a Sea Based Strategic Deterrent capability and served as the launch pad for replacing the Ohio-class submarines and supporting programs.

Senator Reed led efforts to secure $4.2 billion in the Fiscal Year 2021 National Defense Authorization Act (NDAA) to fully support the Columbia-class (Ohio-class replacement) program.  Reed, who also serves on the Appropriations Subcommittee on Defense also helped ensure language was included in the stopgap appropriations law (H.R. 8337) which apportioned $1.6 billion in funding and granted authority for the U.S. Navy to move forward with signing the contract so construction of the first two Columbia-class submarines could stay on schedule.

In 2016, the Navy announced it was naming the class of ballistic missile submarines in honor of the District of Columbia, with the first ship in the class to be named the USS Columbia.  Navy officials have labeled the Columbia-class its top acquisition priority.  The Navy’s FY2021 budget submission estimates the total procurement cost of the 12-ship class at $109.8 billion in then-year dollars.

In 2018, Electric Boat broke ground on a 1-million-square-foot, $800-million multi-year expansion of its manufacturing facilities at Quonset Point.  Senator Reed has worked for years to help fund improvements in and around the Quonset Business Park to help attract and retain business in the area.

“This is a smart investment that bolsters national security and benefits Rhode Island.  Rhode Islanders build the very backbone of these boats and provide our nation with a strategic, technological advantage.  This contract agreement is a testament to the skill and dedication of our defense manufacturing workforce and the local suppliers who contribute to the production of these next-generation submarines,” said Senator Reed.

While these submarines get their start in Rhode Island, they are completed at two shipyards in Groton, Connecticut and Huntington Ingalls Industries’ Newport News Shipbuilding facilities in Newport News, Virginia.

Earlier this year, Senator Reed helped the Southeastern New England Defense Industry Alliance (SENEDIA) land a two-year $18.6 million federal grant from the U.S. Department of Defense to develop a robust regional workforce development partnership that will serve as a pipeline to help connect as many as 5,000 workers with employment opportunities that contribute to the production of submarines.