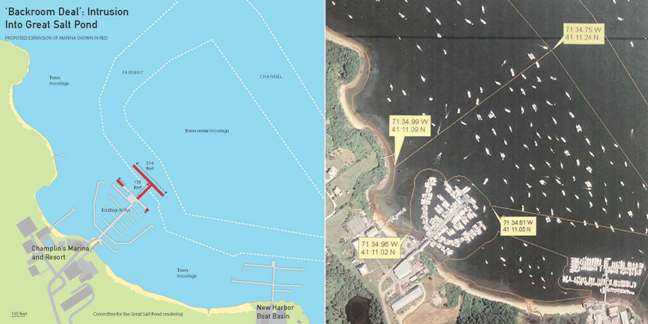 PROVIDENCE, R.I. – In the latest successful effort by a coalition of opponents to stop a major expansion of Champlin’s Marina in the Great Salt Pond on Block Island, the Rhode Island Supreme Court has rejected a motion by Champlin’s and the state Coastal Resources Management Council to accept a quietly negotiated, end-of-the year deal that would have permitted an expansion and that had excluded the Block Island intervenors in the case.

The “joint motion of Champlin’s and CRMC… is hereby denied,” the Court said in a three-page decision issued late on Friday, noting that the Superior Court had decided the case in favor of the opponents and it is on appeal.

“The Superior Court entered judgment in favor of… intervenor/defendants the Committee for the Great Salt Pond, the Block Island Land Trust, the Town of New Shoreham, and the Conservation Law Foundation,” the Court said. That appeal will continue.

The case is known as Champlin’s Realty Associates vs. Coastal Resources Management Council.

In a highly unusual move late last year, while Champlin’s was appealing the Superior Court decision it had lost, an attorney for CRMC wrote to the New Shoreham Town Solicitor that the CRMC “had voted to participate in mediation for the Champlin’s case, on the condition that the Town of New Shoreham also participate.”

The Town of New Shoreham declined to participate, having won repeatedly before the CRMC and in court, but Champlin’s and the CRMC, with the participation of retired Supreme Court Justice Frank Williams, quietly engaged in an unsanctioned mediation process. That resulted in a proposed memorandum of understanding allowing marina expansion.

The intervenors, longtime allies in opposition to the marina expansion, which have been successful since the original plan was proposed in 2003, termed that a“backroom” deal by the two parties and have campaigned against it. They have been supported by the Conservation Law Foundation and are represented by Attorney R. Daniel Prentiss.

“Private deals, made in executive session without notice to opposing parties, are clearly and dramatically incompatible with the trust that was placed in the CRMC to be the guardian of the state’s resources charged by constitution and ancient common law with a public trust,” Attorney Prentiss wrote in answer to the motion filed by Champlin’s and the CRMC.

“This matter is not new to the Court,” the Supreme Court ruling on Friday said, citing an earlier ruling it made holding that “the intervenors are all aggrieved parties within the statute and, therefore, properly are before this court. “

The opponents went to court in February to register their strong opposition to what they called the Coastal Resources Management Council’s “backroom arrangement” and “secretly contrived fix” with the marina owner.

Prentiss wrote that the CRMC engaged in blatantly illegal procedure and had no authority to settle ongoing litigation without the participation of Block Island’s local government and other parties to the litigation.

“The waters in which Champlin’s seeks to build its marina expansion belong to the public at large,” stated Prentiss. “This Court should not countenance the CRMC’s shameful abandonment of standards, and of its solemn responsibilities….”

The long background of the case began in 2003, when Champlin’s Realty Marina and Resort, Inc. applied to the CRMC to approximately double the size of its marina, already the largest on Block Island, a beautiful and popular summertime
resort and residence for 1,000 year-round.

The opponents obtained intervenor status and became full parties to the contested proceedings before the CRMC. The CRMC denied the application for expansion in 2006.