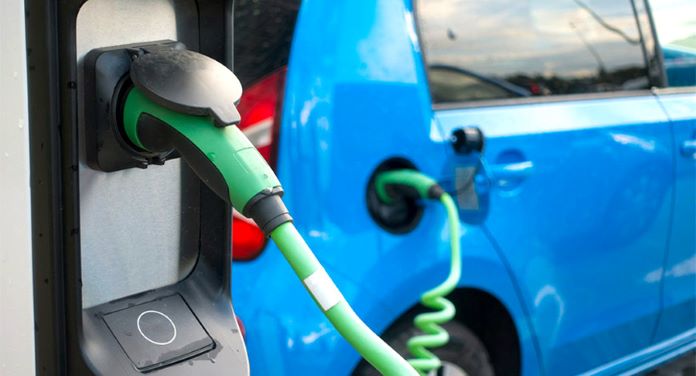 Federal funds will enhance electric car charging network as more Americans convert from gas-guzzlers to electric; Ocean State set to receive a total of $22 million in federal funding over next five years for EV charging transition

WASHINGTON, DC – As electric vehicle (EV) sales in the United States continue to accelerate at a rapid pace, Rhode Island’s Congressional delegation says it is important for states to keep up with demand and for the federal government to be a reliable partner in strengthening the nation’s charging capacity for electric vehicles.  Sales of electric vehicles doubled in 2021 compared with 2020 and global automakers are projected to spend $515 billion dollars on electric vehicles and batteries through 2030, according to an analysis by Reuters.

U.S. Senators Jack Reed and Sheldon Whitehouse and Congressmen Jim Langevin and David Cicilline today announced that Rhode Island will receive $3.38 million this year from the new Bipartisan Infrastructure Law to build out its electric vehicle (EV) charging infrastructure.  Additional federal funding will be administered annually over the next five years by the U.S. Department of Transportation’s Federal Highway Administration, and the state is slated to receive a total of $22 million for EV charging infrastructure under the new law.

“This is a smart investment in boosting Rhode Island’s charging capacity, creating jobs, and reducing pollution.  A lot more electric vehicles will be hitting the road in the months and years ahead and the state needs to be ready.  This will give drivers extra assurance that they’ll have the charging equipment the need, when they need it.  And it will help reduce our dependence on fossil fuels and help the state meet its clean energy goals,” said Senator Reed, a senior member of the Appropriations Subcommittee on Transportation, Housing, and Urban Development (THUD).

“It’s about to get a lot more convenient to drive an electric car around Rhode Island and across country.  A reliable charging network will give more drivers the green light to trade polluting vehicles for electric cars that don’t leave them vulnerable to gas price spikes,” said Whitehouse, a senior member of the Senate Environment and Public Works Committee.  “With demand for battery-powered cars surging, the American automobile industry has an opportunity to lead the electric vehicle revolution.”

“Electric vehicles represent the transportation of the future, so it’s about time that we invest the necessary resources to develop consistent and reliable charging infrastructure that Rhode Island drivers can count on,” said Rep. Jim Langevin. “As part of the Bipartisan Infrastructure Law, this federal funding is a huge win for the Ocean State, which will accelerate the transition towards green, electric vehicle technology, while creating good-paying, union jobs at the very same time.”

“As we look to create a greener, more sustainable future and respond to the very real threats of the climate crisis, this federal funding will allow Rhode Islanders to make the switch to electric cars, knowing that they can access charging stations throughout the state,” said Congressman Cicilline. “Building out our electric vehicle charging infrastructure will also support good-paying union jobs as we bring our transportation system into the 21st century.”

The federal investment is part of $5 billion from the Infrastructure Investment and Jobs Act to build out a national network of EV charging infrastructure.  State and local governments will be able to apply for an additional $2.5 billion in competitive grant funding for EV charging stations beginning later this year.

The United States’ network of 100,000 chargers is currently insufficient to meet demand from the growing number of EV owners — and also struggles with inconsistent plug types, payment options and data availability.  The Bipartisan Infrastructure Law is investing in well-paying union jobs to address these shortcomings, advancing President Biden’s goals to expand the U.S. network to 500,000 chargers and grow EV sales to 50 percent of the automobile market by 2030.

Rhode Island’s Electrifying Transportation report notes three categories of power source defined by the amount of power that can flow to the vehicle:

While most electric vehicle charging takes place at home, public charging infrastructure is an important factor in keeping up with growing use of electric vehicles and allowing drivers to charge at convenient locations. As of December 3, 2021, Rhode Island had 235 fully operational public charging stations with 512 unique charging ports, as well as 209 public Level 2 charging stations, and 26 public DCFC stations.  These statistics do not include any private charging stations. As of December 2021, Rhode Island ranked among the top ten states in the nation for charging ports per capita.

Each state must craft an EV charging station plan by the end of summer to qualify to receive this year’s funding, otherwise the federal funds may be made available to other states.

The historic Bipartisan Infrastructure Law will invest a total of more than $2.5 billion in Rhode Island’s aging infrastructure, creating jobs and retooling the American economy for the twenty-first century as the nation continues to emerge from the coronavirus pandemic.