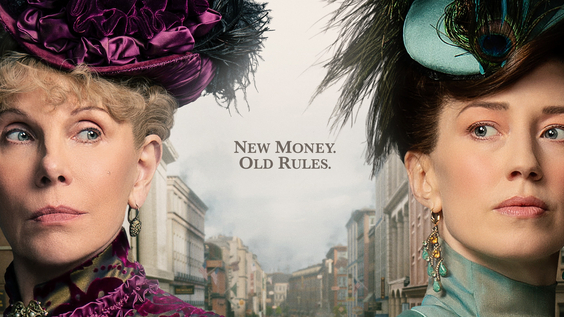 The Rhode Island Film & TV Office is pleased to announce that Lord Julian Fellowes’ new HBO television drama series, The Gilded Age, which filmed in Newport and Warwick in early 2021, will have its world premiere on Monday, January 24, 2022.

The American Gilded Age was a period of immense economic change, of great conflict between the old ways and brand, new systems, and of huge fortunes made and lost.  Against the backdrop of this transformation, HBO’s The Gilded Age begins in 1882 with young Marian Brook (Louisa Jacobson), moving from rural Pennsylvania to New York City after the death of her father to live with her thoroughly old money aunts Agnes van Rhijn (Christine Baranski) and Ada Brook (Cynthia Nixon).  Accompanied by Peggy Scott (Denée Benton), an aspiring writer seeking a fresh start, Marian inadvertently becomes enmeshed in a social war between one of her aunts, a scion of the old money set, and her stupendously rich neighbors, a ruthless railroad tycoon and his ambitious wife, George (Morgan Spector) and Bertha Russell (Carrie Coon).  Exposed to a world on the brink of the modern age, will Marian follow the established rules of society, or forge her own path?

Creator, Writer and Executive Producer Lord Julian Fellowes stated, One of the principal joys of filming The Gilded Age was the discovery of Newport, Rhode Island.  I had heard of it, of course, but I never went there until now and I found a beautiful seaside town, filled with architectural marvels, and not only that, but the people were as kind and helpful as any filmmaker could wish.  I look forward to returning as soon as it can possibly be arranged.”

Executive Producer David Crockett said, “We are incredibly thankful for all of the collaborations we had in Rhode Island – from Steven Feinberg at the Film & Television Office, to the whole team at the department of business regulations, to Trudy and Phil at the Newport Preservation Society and to the owners of numerous homes and business that welcomed us for housing, feeding and holding our cast and crew.”

Governor Daniel J. McKee said, “Rhode Island is very proud to have hosted the cast and crew of such a high-quality series as “The Gilded Age”.  It’s great to see a production that showcases our beautiful Ocean State. With our unique landscape and talented local artists, Rhode Island is an ideal location to film a motion picture or television series.  Every time a production shoots here we see a positive impact on our local businesses. This is the type of energy that keeps moving our economy forward.”

Steven Feinberg, Executive Director of the Rhode Island Film & TV Office, remarked “HBO’s The Gilded Age television series is a dream come true!  Since its inception over a decade ago, we were tenacious to bring this very special production to the Ocean State.  Our beautifully preserved mansions are priceless jewels and we always believed that Newport would be the ideal location for Lord Julian Fellowes’ tale and would help maximize his exquisite vision.   Thankfully, he and his talented team agreed.  Rhode Island is fortunate because we have superb collaborative partners in both the public and private sectors who enjoy building a positive environment for the creative economy to shine.  We are particularly grateful to HBO for choosing to make television history here while providing good jobs for many local artists and hard-working technicians from across Rhode Island.  This is exactly the result we’ve all been working towards for the past few years.  We strongly believe the global audience’s enthusiasm for this entertaining series will boost Rhode Island tourism for many, many years to come!”

Speaker of the House K. Joseph Shekarchi (D-District 23, Warwick) commented “Newport has always been considered a treasure of Rhode Island and starting soon, when The Gilded Age debuts, the rest of the world will also recognize this fact that so many Rhode Islanders already know.  The majesty of the Newport Mansions will be its own character alongside the internationally known actors and actresses who will be filling its grand halls and I am eagerly awaiting the recognition and tourism that this A-list production will bring to our state.”

Senate President Dominick J. Ruggerio (D-District 4, North Providence, Providence) said “Rhode Island has always been a unique and beautiful place to live and work.  It is also ideally suited to the needs of the film and television industry.  Our small, compact size makes us accessible both in terms of coordinating with state and local agencies and businesses, and in working at locations ranging from city streets and historic homes and mansions to the shore and peaceful woodlands.  We warmly welcome The Gilded Age to Rhode Island and greatly anticipate seeing our state grace the screen once again.”

Preservation Society of Newport County CEO & Executive Director Trudy Coxe stated, “It is impossible to overstate the importance of this decision for our work of historic preservation and awareness of Newport’s role in this important era in American history. The selection of the Newport Mansions for Julian Fellowes’ new television show demonstrates the quality of our efforts to keep these spectacular houses looking the way they did during the Gilded Age. Evidently, the producers believe they will serve as the perfect settings for the show’s stories. In addition, this production will have an incredible economic impact for Newport and Rhode Island.

Discover Newport CEO Evan Smith commented, “Discover Newport, on behalf of the local hospitality industry, cordially welcomes Sir Julian Fellowes, HBO, Universal Television and the entire cast and crew of The Gilded Age television series to the legendary shores of Newport and our historic city.  What better way to brand a charming yet dazzling destination like Newport than through the magic of a television series spinning the tale of a glamorous moment in history, filmed in Newport’s estimable mansions.  America’s Gilded Age—not to be forgotten but to be relived and visited for years to come—will come alive yet again through the hearts and minds of its characters.  Kudos and thanks to the Rhode Island Film and Television Office for providing this global opportunity to welcome visitors, producers, directors, writers, actors and dreamers to our city.”

Secretary of Commerce Stefan Pryor stated, “We are proud that this important production has been filmed in Rhode Island—with thanks to the hard work of the Rhode Island Film and Television Office. Newport was an international star during the Gilded Age.  It is entirely proper that this community—which remains a stellar destination–take center stage with this dazzling production.”

Newport Mayor Jeanne-Marie Napolitano said, “The City of Newport with its ocean views, beautiful vistas, and large estates, recognizes sharing these assets with others gives the viewing public a unique perspective on how history unfolded in the United States.  Newport is extremely proud of its efforts of preservation through the years providing employment for our thriving arts community.”

Representative Marvin L. Abney, Chairman of the House Finance Committee (District 73 – Newport, Middletown) added, “We Rhode Islanders know about the beauty of Newport already, but once The Gilded Age premieres, our secret will be out and I could not be more pleased with this fact.  It took a lot of hard-work and collaboration to bring this project to Newport and I thank everyone who was involved, and I cannot wait to witness the fruits of this labor once The Gilded Age reaches the public.”

Representative Lauren H. Carson (District 75 – Newport) said, “Once again, the wonderful and historic atmosphere of Newport will serve as a backdrop for a period drama.  As we have in the past, Newport welcomes the arts and entertainment industries to our community.  Our citizens know how special Newport is and seeing Newport on the screen will again be a wonderful experience to lighten up 2021, remind us how lucky we are to live here and share with HBO viewers.  Welcome to Newport, The Gilded Age.  Enjoy your stay in Newport.”

Senator Louis P. DiPalma (District 12 – Little Compton, Middletown, Newport, Tiverton) stated, “This truly is an exciting time for Newport and the state of Rhode Island.  Newport will be showcased to the world, and I am grateful for all of those who were involved in bringing this first-rate production to Newport.  Rhode Island and Newport have much to offer and now the rest of the country and world will be able to see that on their television screens.”

Senator Dawn Euer (District 13 – Newport, Jamestown) commented, “Those of us in modern-day Newport will be proud to see our city’s most beautiful and historic properties showcased as the rich backdrop for what is sure to be a visually stunning drama.  And after such a difficult period for our economy, our small businesses will greatly appreciate the opportunity to support this production.”