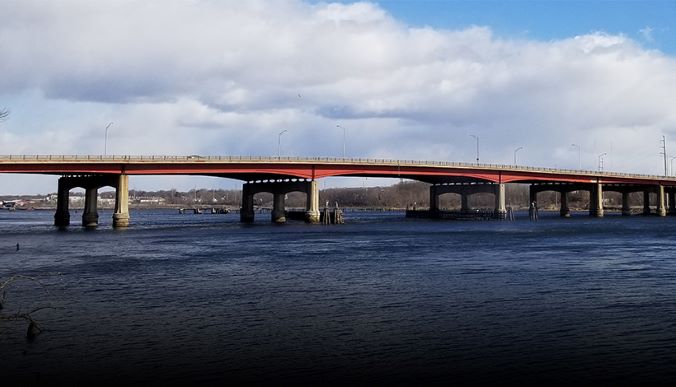 On Friday, April 8 the Rhode Island Department of Transportation (RIDOT) will close the off-ramp from the Henderson Bridge to Massasoit Avenue southbound, the first exit off the bridge when heading toward East Providence.
The closure is permanent and is part of the ongoing $84.4 million project to replace the Henderson Bridge in Providence and East Providence. Drivers should take the next exit toward North Broadway, which also connects to Massasoit Avenue.
Once bridge construction is done, RIDOT will build a new roundabout on the East Providence side of the bridge. It will provide safe and efficient connections to city streets instead of the current system of on and off-ramps.
As part of RIDOT’s commitment to providing alternative transportation options and working to reduce vehicle emissions, the new bridge will have a shared use bike path connecting the on-street bicycle networks in East Providence and Providence as well as the Blackstone River Bikeway. The new bikeway will be much safer than the narrow bike lanes that used to be on the bridge, supporting those who ride or walk to school and work.
RIDOT is replacing the 2,000-foot long Henderson Bridge, which has been structurally deficient for decades. The bridge was over built as part of a proposed highway connection that was never built. The new bridge will be a narrower structure with two lanes of travel in the westbound direction and one lane of travel in the eastbound direction. Its smaller footprint will require less maintenance, and the removal of the ramp and expressway portions will free up approximately 25 acres of land for economic development opportunities.
The project will be done in 2025.
All construction projects are subject to changes in schedule and scope depending on needs, circumstances, findings, and weather.
The replacement of the Henderson Bridge was made possible by RhodeWorks, RIDOT’s ongoing commitment to repair structurally deficient bridges and bring Rhode Island’s transportation infrastructure into a state of good repair, promote economic development, and create jobs. Learn more at www.ridot.net/RhodeWorks.