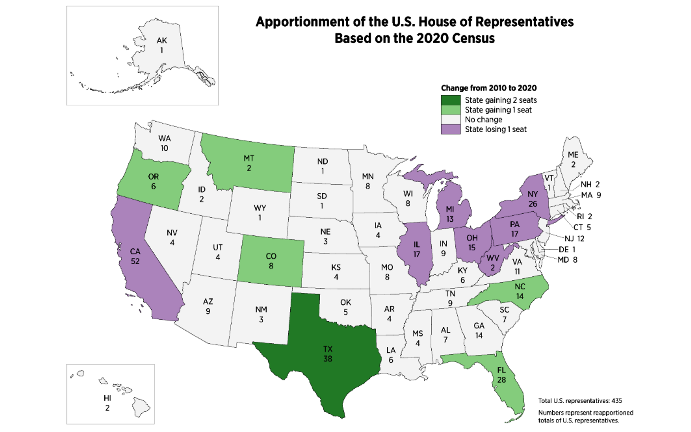 The U.S. Census Bureau has released new population data, showing that Southern and Western states have gained House seats thanks to population growth and migration, while Northern states have lost seats, shifting some political influence to Republican strongholds.

The state population counts released Monday are part of a decennial census that determines whether states gain or lose congressional seats and Electoral College votes, helping to shape the political landscape for the next decade.

The new counts from the 2020 Census show that the southwestern state of Texas will gain the most House seats with an additional two. One-seat gains will go to the southern states of Florida and North Carolina, as well as to the western states of Colorado, Montana and Oregon.

The states that are losing one House seat are New York, California, Illinois, Michigan, Ohio, Pennsylvania and West Virginia.

The changes are taking place because under the U.S. Constitution, the 435 seats in the House of Representatives, as well as the votes in the Electoral College that determine the U.S. president, are divided among U.S. states based on population. As states grow because of population gains, they receive more representation in Congress, while states that either lose population or do not grow as fast lose House seats.

The new configuration of House seats means that states with gains or losses will need to redistrict, a process that has in the past led both parties to try to skew the districts to benefit one party over another, known as gerrymandering.

The changes could be enough for Republicans, who control the statehouses in states like Texas and Florida, to create districts in those states that could threaten Democrats’ razor-thin majority in the U.S. House of Representatives.

California is still the most populous U.S. state, according to the data, but because of population declines, it will lose a congressional seat for the first time in its history.

More precise census data showing population counts at the level of neighborhood blocks is expected to be released by the end of September and will be used to redraw districts for state legislative seats.