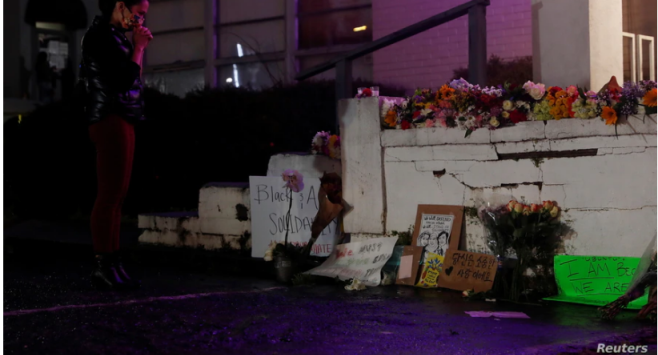 The man charged with killing eight people in a series of shootings at massage parlors in the southeastern U.S. state of Georgia is expected to be arraigned Thursday.

Prosecutors Wednesday charged Robert Aaron Long, 21, of Woodstock, Georgia, with eight counts of murder and one count of aggravated assault. He was arrested after the Atlanta-area shootings late Tuesday and is being held in the Cherokee Country Adult Detention Center.

Police said Wednesday they did not yet have a motive for the shootings in which six of those killed were women of Asian descent. A white man and a white woman were the other two victims. A ninth person remained hospitalized with injuries, police said.

When he was arrested, Long told police the attacks were not racially motivated. He had issues with “sex addiction,” authorities said.

The crime created a wave of fear in the Asian American community, which was already reeling from attacks that have occurred since the start of the coronavirus pandemic a year ago. The virus first surfaced in China in December 2019.

The shootings appear to be at the “intersection of gender-based violence, misogyny and xenophobia,” state Rep. Bee Nguyen, the first Vietnamese American to serve in the Georgia House, said.

Nguyen has been a frequent advocate for women and communities of color in the state, The Associated Press reported.

“He apparently has an issue, what he considers a sex addiction, and sees these locations as something that allows him to go to these places. And it’s a temptation for him that he wanted to eliminate,” Cherokee County sheriff’s Capt. Jay Baker told reporters.

Officials said they didn’t know if Long had actually frequented the parlors where the shootings occurred and said he may have been on his way to Florida to commit more shootings.

A law enforcement officer told the cable news network CNN that Long’s family had recently kicked him out of the house because of his sexual addiction. He reportedly spent hours watching pornography.

Atlanta Police Chief Rodney Bryant said it was too early to classify the shootings as hate crimes.

Captain Baker was criticized on social media Wednesday for telling reporters that Long had “a really bad day” and for Facebook posts that disparaged people of Asian descent.

In Facebook posts last March and April, Baker encouraged followers to buy an anti-Asian T-shirt that said the coronavirus was an “imported virus from Chy-na,” repeating similar language then-U.S. President Donald Trump began to use shortly after the global outbreak began.

“Place your order while they last,” Baker said in one of the Facebook posts that he has not commented on.

President Joe Biden said he was withholding judgment about the motivations behind the shootings until there is more information.

“I am making no connection at this moment of the motivation of the killer. I am waiting for an answer from — as the investigation proceeds — from the FBI and from the Justice Department,” he said before hosting a bilateral meeting with the prime minister of Ireland. ”I’ll have more to say when the investigation is completed.”

The other victims’ names have not been released.

“I commend law enforcement for their quick work in arresting a suspect in the tragic shootings,” she said. “I have remained in close contact with the White House and APD as they work with federal, state and local partners to investigate the suspect, who is responsible for this senseless violence in our city.”

Gov. Brian Kemp tweeted, “These horrific crimes have no place in Georgia.” Kemp also said he and the state’s first lady “are heartbroken and disgusted by the heinous shootings that took place last night.” He said they will continue to pray for the families and loved ones of the victims.

Vice President Kamala Harris said the shootings speak “to a larger issue, which is the issue of violence in our country and what we must do to never tolerate it and to always speak out against it.”

The first attack took place at a massage parlor in the town of Acworth, about 50 kilometers north of Atlanta. Authorities there said a shooter killed two Asian women, a white woman and a white man, and wounded another man.

About an hour later, police in Atlanta found three Asian women dead from apparent gunshot wounds at a beauty spa. They then found another Asian woman dead of a gunshot at a spa a short distance away.

Police said surveillance video showed the suspect’s vehicle at all three locations, and that they were very confident the same shooter was responsible for all the attacks.

After a highway pursuit, police stopped a vehicle about 240 kilometers south of Atlanta and arrested Long. After refusing to stop, Crisp County Sheriff Billy Hancock said officers bumped the rear of Long’s car, causing him to crash.

Long’s parents helped authorities locate him by reviewing police surveillance video of him and giving investigators his cellphone information, according to Cherokee County Sheriff Frank Reynolds.

The shootings come amid a rising number of attacks against people of Asian descent in the United States.

“I want to start by saying something directly to the families of the shooting victims in Atlanta last night,” first lady Jill Biden said Wednesday. “My heart is with you. And I hope that all Americans will join me in praying for everyone touched by this senseless tragedy.”

Hate crimes against Asian Americans jumped by 149% in 16 major U.S. cities from 2019 to 2020, according to a study released this month by the Center for the Study of Hate and Extremism. Overall hate crimes fell 7% during the same period.

The attack was the sixth mass killing this year in the United States, and the deadliest since the August 2019 Dayton, Ohio, shooting that left nine people dead, according to a database compiled by The Associated Press, USA Today and Northeastern University