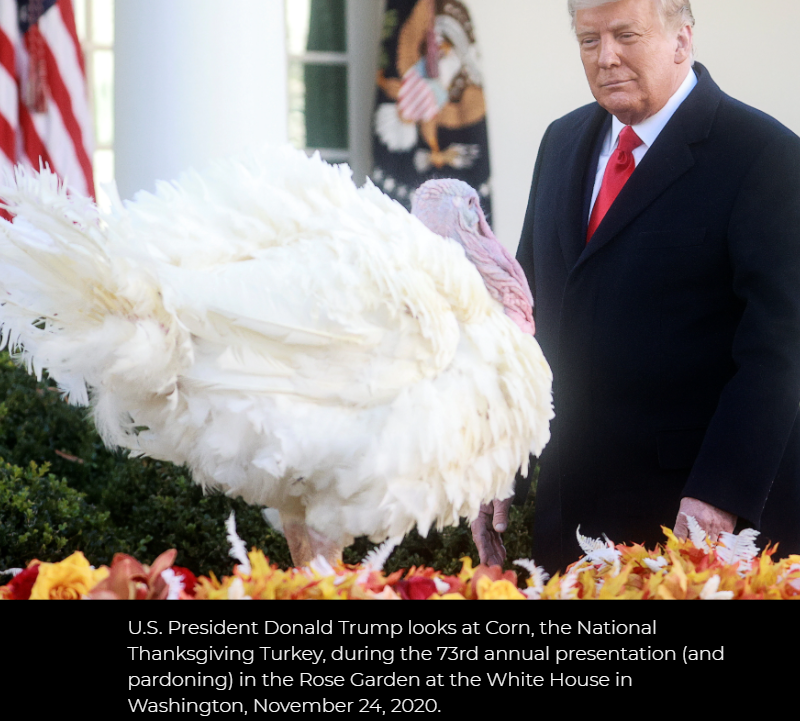 “Corn, I hereby give you a full pardon,” said President Donald Trump, who was flanked by first lady Melania Trump and other guests. “Thank you, Corn.”

His brother, Cob, wasn’t so lucky. The White House ran a poll on Twitter, asking those on the social media platform which one of the two turkeys Trump should pardon.

The turkeys, which are bred and fed for size, were raised by Ron Kardel, National Turkey Federation chairman and a sixth-generation turkey, corn and soybean farmer from Walcott, Iowa.

As has been the case since 1947, the two were introduced to the public a day earlier at the Willard Intercontinental Hotel in Washington, D.C., where the birds had their own room.

The tradition of turkey farmers giving presidents the birds as gifts for Thanksgiving dates to the 1870s, but according to the White House site, so many turkeys were being sent that in 1923, then-President Calvin Coolidge discouraged farmers from sending them.

However, the tradition was already established, and by the 1940s, farmers were once again sending turkeys to the president.

While you might think the unpardoned turkey will end up as the centerpiece of a Thanksgiving Day feast, all the turkeys end up on exhibit at various university veterinary schools. Trump said Corn and Cob would be heading to Iowa State University in Ames.

The two will be on display starting December 5.

“We are excited to welcome these national Thanksgiving icons onto our animal science farms. Iowa State University is invested in supporting the poultry and turkey industries through teaching and research as evidenced in our new state-of-the-art turkey production facility to be built in the spring of 2021. We welcome people to come view the newest arrivals at Iowa State,” Dan Thomson, professor and chair of the Department of Animal Science at Iowa State University, said in a statement.