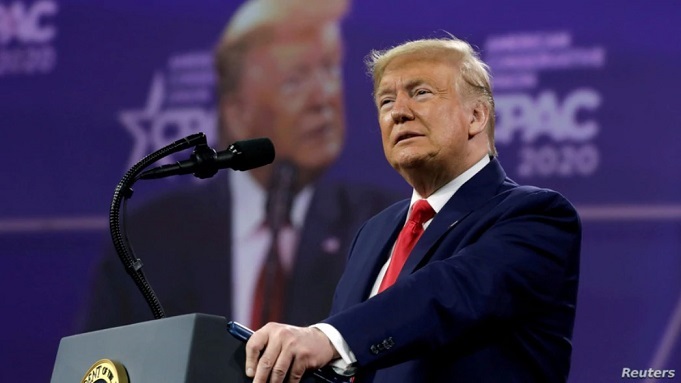 WASHINGTON – Millions of pages of former U.S. President Donald Trump’s tax returns and business documents have been turned over to New York prosecutors after he lost a 17-month effort to keep investigators from obtaining them.

The records, including the federal income tax returns Trump filed with the government’s Internal Revenue Service from 2011 to 2019, were handed over to New York District Attorney Cyrus Vance Jr. by Trump’s longtime accounting firm, Mazars, on Monday.

The handoff came hours after the U.S. Supreme Court ruled against the former president, who left office a month ago.

Trump, alone among U.S. presidents over the last four decades, refused to disclose his tax returns, saying he was under audit, although there is no prohibition preventing such a disclosure. The documents are likely to remain secret under normal grand jury secrecy rules unless they would be divulged as part of any criminal prosecution against Trump.

Earlier this week, Trump assailed the U.S. Supreme Court’s approval of the release of the documents to Vance, and called the prosecutor’s investigation a politically motivated “fishing expedition.”

“This is something which has never happened to a president before. It is all Democrat-inspired in a totally Democrat location — New York City and state — completely controlled and dominated by a heavily reported enemy of mine, Gov. Andrew Cuomo,” Trump said.

Vance, in response to the Supreme Court order, said, “The work continues.”

Those familiar with the materials handed to the prosecutors have told news organizations that the documents include financial statements, records relating to the preparation and review of tax returns, and the tax returns themselves.

The investigation centers on whether Trump and the Trump Organization provided false information to financial institutions or banks and local governments about the value of the properties they owned, either to obtain loans at favorable interest rates or cut their real estate taxes.

Trump is also under a criminal investigation in Georgia, where a prosecutor in Atlanta is probing his efforts in December to get state election officials to “find” him enough votes to upend Democrat Joe Biden’s November election victory in the state.