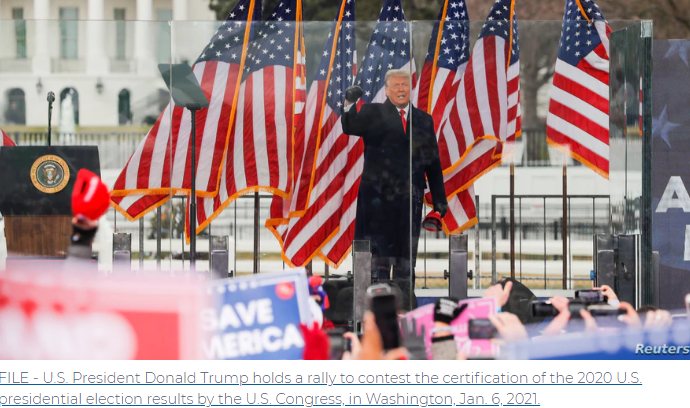 WASHINGTON – The historic second impeachment trial of former President Donald Trump starts Tuesday in the U.S. Senate, with Trump accused of inciting insurrection a month ago by urging his supporters to confront lawmakers at the U.S. Capitol as they were certifying that Democrat Joe Biden had defeated Trump in the 2020 election.

The protest turned into mayhem, as about 800 supporters of Trump stormed past authorities into the Capitol, smashed doors and windows, ransacked some congressional offices and scuffled with police. Five people were left dead, including a Capitol Police officer whose death is under investigation as a homicide and a rioter shot by a police officer.

The 100 senators – split evenly between Republican and Democratic caucuses — hearing the impeachment case against the single-term president are in a unique position: many of them were witnesses themselves to the chaos of January 6 as they fled the Senate chamber for their own safety.

With a two-thirds vote needed for conviction, 17 Republicans would have to turn against Trump, their Republican colleague, for him to be convicted, assuming all 50 Democrats vote to convict. As such, Trump almost certainly will be acquitted, just as he was a year ago when he was accused of soliciting the president of Ukraine to dig up dirt against Biden ahead of last November’s election.

Whatever the outcome, however, Trump stands alone in more than two centuries of U.S. history as the only president to be impeached twice.

A week after the storming of the Capitol, the House of Representatives voted 232-197, with 10 Republicans joining all 222 Democrats, to accuse Trump of “incitement of insurrection.” Then, on January 20, Biden was inaugurated as the country’s 46th president and Trump, no longer in power, flew for the last time on Air Force One to his Atlantic coastline mansion in Florida, where he has stayed since.

Trump has declined a request from Democrats to testify in his defense at his impeachment trial and is not expected to attend it. The trial could last a week or longer.

The nine Democratic House impeachment managers bringing the case against Trump — several of them former prosecutors — claim that Trump, by urging his supporters to contest his election defeat at the Capitol, was “singularly responsible” for the riot that ensued.

Trump urged supporters to come to Washington on January 6, saying it would be “wild.” At a rally near the White House shortly before his supporters walked 16 blocks to the Capitol, Trump continued his weeks-long barrage of unfounded claims that election fraud had cost him another four-year term.

At one time in speaking for more than an hour, Trump told his supporters “to peacefully and patriotically make your voices heard” by marching to the Capitol.

But he also exhorted them, saying, “Our country has had enough. We will not take it anymore and that’s what this is all about. To use a favorite term that all of you people really came up with, we will stop the steal.”

Ahead of the trial, the House impeachment managers said in a legal brief, “President Trump’s responsibility for the events of January 6 is unmistakable” and that the former president’s “conduct must be declared unacceptable in the clearest and most unequivocal terms,” even though he is no longer in office.

The U.S. Constitution allows for the removal of officials found guilty of “high crimes and misdemeanors.” Trump’s two experienced trial lawyers he hired — David Schoen and Bruce Castor — have argued that since Trump is no longer president, and therefore could not be removed from office, his impeachment trial is unconstitutional.

The Senate, however, has conducted impeachment trials of former officials, not allowing them to avoid a trial for possible wrongdoing by resigning, as happened in an 1876 case, or in Trump’s case, by leaving office as his term ended. Moreover, the House impeachment lawyers argue that Trump incited the insurrection and was impeached by the House while he was still in office.

Senator Rand Paul of Kentucky, a staunch Trump supporter, attempted to block the trial on such constitutional grounds, but five Republicans joined all 50 Democrats in voting 55-45 to proceed with the trial. But the vote also signaled Trump’s seeming Republican support for acquittal remains significant, more than enough to block his conviction.

Paul says there is a “zero chance of conviction.” If Trump were to be convicted, the Senate, on a simple majority vote, could bar him from ever holding office again.

On Tuesday, as the trial starts in earnest, lawyers for Trump and the House managers prosecuting him again are expected to debate the constitutionality of holding the trial. But assuming the Senate votes to go ahead with it, House managers would begin to present their case on Wednesday, likely showing some of the clips of hours of videos of the mayhem.

Then the president’s lawyers would respond with his defense.  According to an agreement announced Monday by congressional leaders, each side will have 16 hours over two days to make their arguments.

Trump’s lawyers have mounted a vigorous defense and contend that the former president bears no responsibility for what occurred January 6.

In a brief filed Monday, they contended that the case against him amounts to “political theater” brought by anti-Trump Democrats. Trump’s lawyers suggested that he was simply exercising his constitutionally guaranteed right of free speech when he disputed the election results and argued that he explicitly encouraged his supporters to engage in a peaceful protest.

“Instead, this was only ever a selfish attempt by Democratic leadership in the House to prey upon the feelings of horror and confusion that fell upon all Americans across the entire political spectrum upon seeing the destruction at the Capitol on Jan. 6 by a few hundred people,” the lawyers wrote. “Instead of acting to heal the nation, or at the very least focusing on prosecuting the lawbreakers who stormed the Capitol, the Speaker of the House (Nancy Pelosi) and her allies have tried to callously harness the chaos of the moment for their own political gain.”

In response, the House Democrats prosecuting Trump said, “We live in a nation governed by the rule of law, not mob violence incited by presidents who cannot accept their own electoral defeat.”

“The evidence of President Trump’s conduct is overwhelming,” the managers wrote. “He has no valid excuse or defense for his actions. And his efforts to escape accountability are entirely unavailing. As charged in the Article of Impeachment, President Trump violated his Oath of Office and betrayed the American people.”