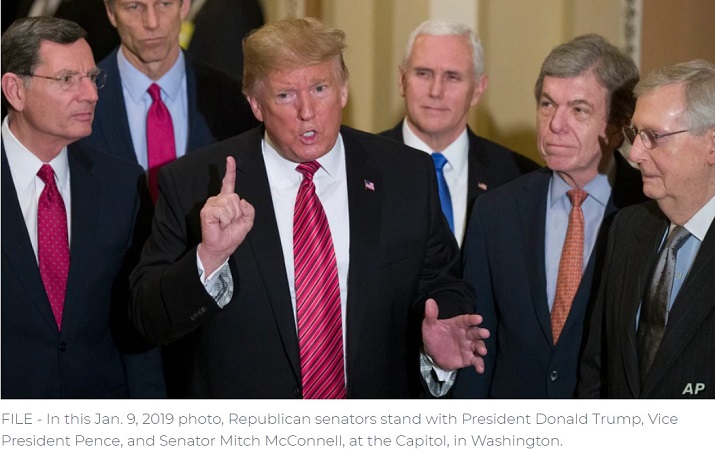 WASHINGTON – The political fortunes of former U.S. President Donald Trump are now an open question, even after the Senate acquitted him of allegations that he incited insurrection last month by urging hundreds of his supporters to confront lawmakers at the U.S. Capitol as they were certifying his election loss to Democrat Joe Biden.

Moments after the Senate voted 57-43 on Saturday to convict Trump but falling short of the required 67 votes needed to do so, the former president said he was not done with political life. Trump gave no explicit hint that he might attempt another run for the presidency in 2024, as he suggested he might when he left office last month. The House of Representatives impeached Trump in January on the single charge of “incitement of insurrection.”

Trump called the impeachment case against him “another phase of the greatest witch hunt in the history of our country. No president has ever gone through anything like it.”

He added, “Our historic, patriotic and beautiful movement to make America Great Again has only just begun. In the months ahead, I have much to share with you, and I look forward to continuing our incredible journey together to achieve American greatness for all our people.”

One of his staunchest Republican supporters, Senator Lindsey Graham of South Carolina, told the “Fox News Sunday” show that he spoke with the former U.S. leader after the Senate impeachment trial ended. He said that Trump is “ready to move on to build the party” to try to retake control of both the Senate and House of Representatives from Democratic control in the 2022 elections halfway through Biden’s first four-year term in the White House.

“If you want to win, you have to work with President Trump,” Graham said. “The Trump movement is alive and well. The most potent force in the Republican party is Donald Trump.”

But Maryland Governor Larry Hogan, a Republican critic of Trump, told CNN that with Trump’s election loss and controversial end to his presidency, “We’re going to have a real battle for the soul of the Republican Party over the next couple of years,” questioning whether Republicans are “going to be a party that can’t win national elections.”

“Or somehow,” Hogan asked rhetorically, “Are we going to get back to a real traditional Republican party with common-sense conservatives…to push for the things that we’ve always believed in and to try to compete with Democrats?”

National polls show that many Republican voters remain supportive of Trump, but Hogan said, “I think that’s going to change over time. We’re only a month into the Biden administration. I think the final chapter of Donald Trump and where the Republican Party goes hasn’t been written yet.”

One of Graham’s fellow Republicans in South Carolina, former Governor Nikki Haley, who served as Trump’s ambassador to the United Nations, turned on the former president last week, although Graham said he thinks her assessment is wrong.

Democratic Senator Amy Klobuchar of Minnesota, who voted to convict Trump, told Fox News she does not think Trump will remain a key player in the Republican Party.

“The American people have seen what this man has done,” she said. “He is done.”

Graham said Trump was “mad at some folks” who turned against him in the Senate trial as seven of the 50 Republicans in the chamber voted with all 50 Democrats to convict him. But Graham said Trump is “ready to hit the trail” in support of Republican candidates.

“I don’t think he caused the riot,” Graham said of Trump’s admonition to hundreds of supporters to march to the Capitol January 6 and “fight like hell” to upend Biden’s victory as lawmakers were certifying that Trump had become the fifth president in U.S. history to lose his re-election bid after a single term in office.

“It was politically protected speech in my view,” Graham said, referring to the U.S. Constitution’s guarantee of freedom of speech.

Senate Minority Leader Mitch McConnell, after voting to acquit Trump because he did not believe the Senate had the right to sit in judgment of Trump since his term had already ended, criticized his long-time political ally for his role in fomenting the attack that left five people dead, including a Capitol police officer.

McConnell said Trump was “practically and morally responsible for provoking the events of the day. The people who stormed this building believed they were acting on the wishes and instructions of their president.”

On Sunday, Senator Lisa Murkowski of Alaska, one of the seven Republicans who voted to convict Trump, said in a statement, “If months of lies, organizing a rally of supporters in an effort to thwart the work of Congress, encouraging a crowd to march on the Capitol, and then taking no meaningful action to stop the violence once it began is not worthy of impeachment, conviction, and disqualification from holding office in the United States, I cannot imagine what is.”

She added, “By inciting the insurrection and violent events that culminated on January 6, President Trump’s actions and words were not protected free speech. I honor our constitutional rights and consider the freedom of speech as one of the most paramount freedoms, but that right does not extend to the president of the United States inciting violence.”