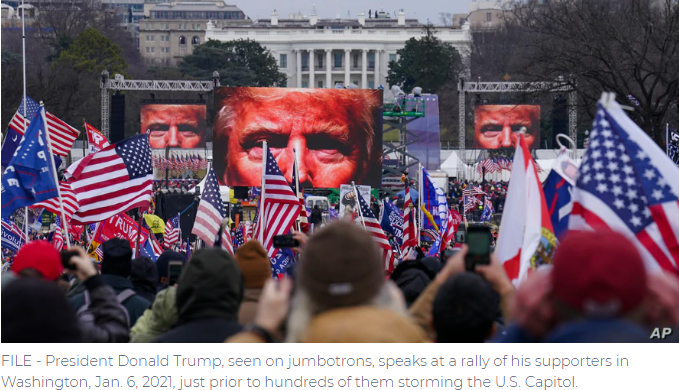 WASHINGTON – Two key U.S. Republican senators — Marco Rubio and Mitt Romney — disagreed sharply Sunday about the merits of the upcoming Senate impeachment trial of former Republican President Donald Trump, who is accused of inciting insurrection in the storming of the U.S. Capitol by hundreds of his supporters on January 6.

At a rally near the White House that day, Trump urged supporters to march to the Capitol to fight for him in confronting lawmakers as they debated whether to certify the Electoral College vote showing he had lost reelection to President Joe Biden. Biden was inaugurated last week as the country’s 46th president.

Rubio, a Florida lawmaker, told the “Fox News Sunday” show that Trump “bears responsibility for some of what happened.” But Rubio said he opposes the Senate trial after the House of Representatives impeached Trump.

The mayhem left five people dead, including a police officer whose death is being investigated as a homicide. Trump supporters — roughly 800, according to officials — rampaged past authorities, ransacked some congressional offices and scuffled with police before order was restored and lawmakers in the early hours of January 7 officially declared Biden the winner.

“We’re just going to jump right back into what we’ve been going through for the last five years and bring it up with a trial and it’s going to be bad for the country,” he said. “It really is.”

“This is not a criminal trial,” Rubio said. “This is a political process and would fuel these divisions that have paralyzed the country.”

Romney, a senator from Utah and the losing Republican presidential candidate in 2012, told CNN, “I believe incitement to insurrection is an impeachable offense. If not, what is?”

Romney said he believes Trump was “complicit in an unprecedented attack on our democracy.”

At the rally before hundreds of his supporters walked 16 blocks to the Capitol, Trump repeated weeks of unfounded complaints that he had been cheated out of reelection by fraudulent votes and vote-counting even though he had lost 60 court challenges to the outcome, including in rulings by some judges he had appointed.

“There is no evidence this election was stolen,” Romney said.

The Senate trial starts the week of February 8. A two-thirds majority in the Senate would be required to convict Trump. With the Senate politically divided between 50 Republicans and 50 Democrats, 17 Republicans would have to turn against Trump for a conviction, assuming all Democrats vote as a bloc against the former president.

If he is convicted, a separate, simply-majority vote could bar Trump from holding federal office again.

Already, Trump stands as the only U.S. president in the country’s 245-year history to be impeached twice. The House impeached him in late 2019, accusing him of trying to enlist Ukraine to dig up dirt against Biden ahead of the November election, but the Senate acquitted him last February.

Romney was the only Republican to vote to convict Trump in his first impeachment trial, but several Republicans have said they are open to convicting him of inciting insurrection after the January 6 melee that forced lawmakers to scramble for their safety as the rioters rushed into the halls of Congress.

One of the House Democratic impeachment managers who will present the case in the Senate against Trump, Congresswoman Madeleine Dean of Pennsylvania, told CNN that they will “put together a case that is so compelling” to confront “the big lie” that Trump had been cheated out of reelection.

She called Trump’s incitement of insurrection “an extraordinary, heinous crime. The American public saw what happened.”

“This was a terrifying moment … incited by the president,” she said. “This cannot go unanswered.”