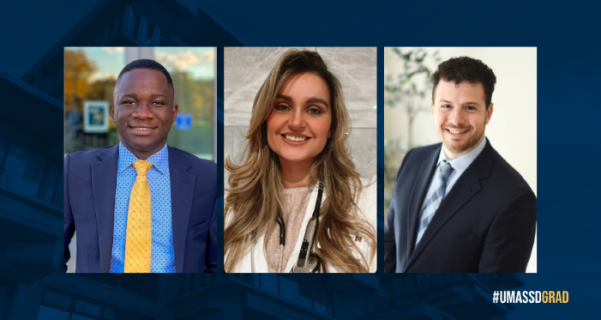 Dartmouth, Ma. – April 8, 2022 – UMass Dartmouth has announced the student speakers for the Class of 2022 Commencement Ceremonies on May 6 and May 9.

The schedule for the weekend is as follows:

Friday, May 6, 2022 – Cressy Field on the UMass Dartmouth campus

Monday, May 9, 2022 – Main Auditorium on the UMass Dartmouth campus

The University is also excited to announce the student commencement speakers for each ceremony.

Narcisse Kunda (Marlborough, Mass.) is a management (organizational leadership concentration) and marketing dual-major in the Charlton College of Business, student-employee of five on-campus jobs, five-time Chancellor’s List student (minimum 3.8 GPA), student government leader, and member of eight different student organizations on campus. An immigrant of the Democratic Republic of Congo, Narcisse and his family moved to the United States speaking no English in 2015. Narcisse was twice been elected to represent the UMass Dartmouth student body on the University of Massachusetts Board of Trustees. This year, he is serving as the student representative on the Campus Climate Steering Committee, University Budget Review Board, and the Diversity Council. Narcisse is also a student ambassador for the Charlton College of Business, the Vice President of the Class of 2022, and has been an active member of Collegiate DECA and the National Society of Black Engineers. Impassioned to give back to his community, Narcisse has led a variety of community service projects through the Leduc Center for Civic Engagement and served as manager of UMassD’s on-campus food pantry. This past summer, Kunda worked as IT Project Management Intern at State Street, where he will begin his professional career as a Senior Associate in July.

Thais Sousa (Fall River, Mass.) has been a registered nurse for 12 years and will be receiving her Doctor of Nursing Practice: Nurse Practitioner this year. For the last five years, Thais has balanced life as a mother, wife, Transitional Care Unit nurse, and doctoral student. Before that, she came to the U.S. from Brazil at 18 and began learning to speak English. Her nursing educational journey started a few years later when she enrolled at Bristol Community College. Thais completed her undergraduate degree in Nursing at UMass Dartmouth in 2017 and began her doctoral studies soon after.As a nurse in Fall River, Thais has assumed progressive responsibility from staff nurse to overseeing care in the cardiac unit. As someone fluent in Portuguese and Spanish, she was able to translate for patients as well. Thais is also a member of the Sigma Theta Tau International Honor Society for nurses and the American Nurses Association. Her doctoral capstone research project inspired her passion for helping vulnerable populations such as mothers experiencing Substance Abuse Disorder. For Thais, nursing is her opportunity to give back to the community. Through her preparation at UMassD, she feels prepared to improve the lives of those in need.

Joseph Reynold Spadoni (Norwood, Mass.) relished his time at UMass Law where served as an Academic Fellow under the guidance of Professor Amy Vaughan-Thomas, as a Contract Law and Law Review Note Writing teaching assistant to Professor Jeremiah Ho, and as a Constitutional Law teaching assistant to Professor Dwight Duncan. He was elected as the Executive Notes Editor of the UMass Law Review, where he was able to work with the most remarkable group of Associate Editors. Joseph worked as a judicial intern at the Superior Court in Dedham, Massachusetts, with Judge Mark A. Hallal, and after graduating, Joseph will be working as a judicial law clerk at the Massachusetts Appeals Court. Additionally, Joseph’s first piece of scholarship, The Unconscionability of the NFL’s Franchise Tag, was published in the University of Denver Sports & Entertainment Law Journal. Before enrolling at UMass Law, Joseph received a Bachelor of Arts in Philosophy at the College of the Holy Cross in 2016.