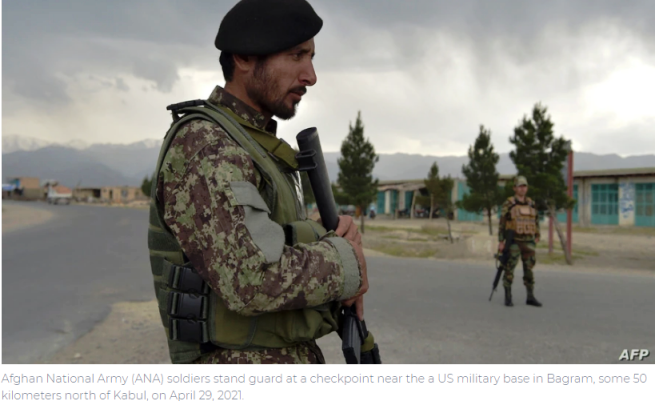 A new quarterly U.S. report has documented a staggering 82% increase in “insider attacks” on Afghan government security forces in the first quarter of 2021, resulting in 115 personnel killed and 39 wounded.

SIGAR is not allowed to include full ANDSF casualty data because U.S. forces in Afghanistan keep it classified at the request of the Afghan government.

The report noted that ANDSF suffered a total of 31 insider attacks from Jan. 1 through April 1, and the number of casualties they caused were more than double compared to the same period in 2020.

Taliban insurgents posing as Afghan police or military personnel are behind most of these insider attacks.

SIGAR submitted its quarterly report as 2,500 or so U.S. troops are preparing to begin pulling out of Afghanistan beginning Saturday. The military drawdown is to end by Sept. 11 and intends to conclude America’s longest war.

Nearly 17,000 U.S. Defense Department contractor personnel supporting the agency’s Afghan operations also will move out of the country along with the American troops. This includes 6,147 U.S. citizens, 6,399 third-country nationals, and 4,286 Afghan nationals, according to SIGAR.

The agency noted it is unclear who, if anyone, will replace contractor personnel or perform their work after their withdrawal.

“Without continued contractor support, none of the Afghan Air Force’s (AFF) airframes can be sustained as combat effective for more than a few months, depending on the stock of equipment parts in-country, the maintenance capability on each airframe, and when contractor support is withdrawn,” SIGAR said, citing U.S. military assessments.

The quarterly report explained that DOD contractors provide for and maintain ANDSF ground vehicles and train local technicians. Although the ANDSF has “dramatically improved its share of the work, it is still falling well below benchmarks for its share of the maintenance work orders they — rather than contractors — are supposed to perform.”

The withdrawal of American and NATO forces stems from a year-old agreement Washington negotiated with the Taliban, raising expectations at the time it also would encourage the insurgents and the Afghan government to agree on a power-sharing political deal to end the war.

But talks between the Afghan adversaries, which started last September, have failed to produce the desired outcome; rather, they have remained largely deadlocked, raising fears the conflict could intensify and cause more bloodshed once all foreign troops depart.

American military commanders have in recent statements admitted Afghan security forces “will certainly collapse” in the face of increased Taliban assaults if the U.S. is to stop all assistance.

The Afghan war, which started with the October 2001 U.S.-led international military invasion of the country, is said to have killed an estimated 241,000 people to date.