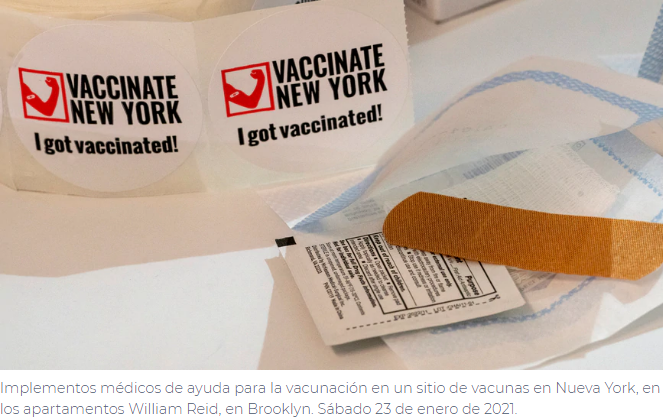 WASHINGTON – The U.S. government’s effort to vaccinate millions of Americans against the coronavirus pandemic is lagging, new health officials in President Joe Biden’s administration conceded Sunday. But they held out hope that the campaign to curb the virus will markedly improve within three months.

“The plane is in a nosedive and we’ve got to pull it up,” Xavier Becerra, Biden’s choice as health and human services chief, told CNN about the vaccination progress.

“What we inherited didn’t work, and now we’ve got to make it work,” Becerra said.

He said problems won’t be fixed quickly, but that “we can do better…we can get us back to real normality.”

Biden has set a goal of administering 100 million vaccination shots in his first 100 days in office. Last week, he signed orders to ramp up the production of more doses of two vaccines now approved for use and other medical equipment needed to treat those who have contracted COVID-19, the infectious disease caused by the virus.

That pace of vaccinations is now roughly on track to be met, which would inoculate about 67 million people, some with their initial shot and some with both of their required shots. Some critics say the pace should be quicker.

Becerra said, “Getting 100 million shots out there in 100 days is incredibly important. It’s ambitious, it’s bold, it’s doable. We have to do it.” Biden’s chief medical adviser, Dr. Anthony Fauci, told CBS News’s “Face the Nation” show, the number was “a floor, not a ceiling.”

Dr. Rochelle Walensky, the new director for the Centers for Disease Control and Prevention, told the “Fox News Sunday” program, “We have to go faster,” but that the lack of a sufficient supply of the vaccine may prevent that.

“The supply is probably going to be the most limiting constraint,” she said. “We’re really hoping that after that first 100 days we’re going to have much more production.”

“I’m hopeful we’ll get an increase in supply, not a stagnating one. We don’t have as many doses now that we would like,” she said. Walensky said she hopes that changes by the end of March.

“One of the biggest problems we have right now is that I can’t tell you how much vaccine we have,” she said. Walensky said that if she cannot tell state governors and health officials how much vaccine they will be receiving, “then they can’t plan…they can’t figure out how many appointments to make.”

“The fact that we don’t know today, five days into this administration, and weeks into planning, how much vaccine we have, just gives you a sense of the challenges we’ve been left with” by the former Trump administration.

The United States has now recorded 25 million coronavirus infections and more than 417,000 deaths, both more than in any other country, according to the Johns Hopkins University.

As he signed orders last week to combat the virus, Biden said, “Things are going to continue to get worse before they get better,” with the U.S. death toll likely to top a half million by next month as tens of thousands of new cases are recorded daily.

“We didn’t get into this mess overnight, and it’s going to take months for us to turn things around,” Biden said.

On Saturday, the U.S. reached one milestone – 20 million doses of COVID-19 vaccines administered, a figure the Trump administration had hoped to reach by the end of last month. But the disease control center said that is just shy of half (49.6%) the number of doses delivered to states to be administered.

It is not clear why there is a lag.

Fauci told CNN last week, “What I think we really need to do is we’ve got to go into the trenches” to try to figure out why some states are not administering the doses they have while other states are desperate for more. “You’ve got to get into the local area and find out, ‘What’s going on here? What’s wrong? Let’s try and fix it.'”

In the Trump White House, Birx said, “I saw the president presenting graphs that I never made. Someone inside was creating a parallel set of data and graphics that were shown to the president.”

She said that last April, when Trump suggested that the virus could be treated with a disinfectant, “I wasn’t prepared for that. I didn’t even know what to do in that moment.”