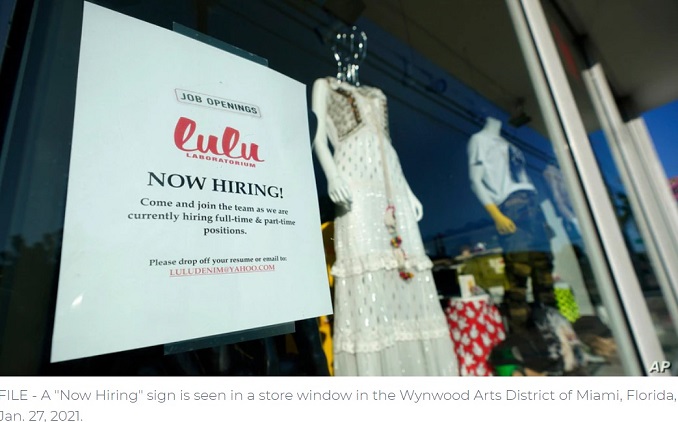 The U.S. economy should expand at its normal pace over the next decade, starting in mid-2021, once the coronavirus pandemic is under control, budget forecasters in Congress predicted Monday.

The nonpartisan Congressional Budget Office (CBO) said as millions of Americans are vaccinated against the virus, “the economic expansion that began in mid-2020 will continue” through 2031.

The CBO said the $20.8 trillion U.S. economy, the world’s largest, “is projected to return to its pre-pandemic level in mid-2021 and to surpass its potential” — its maximum sustainable level — in early 2025.

The CBO projected the U.S. unemployment rate — 6.7% in December — would gradually decline through 2026, and the number of people employed return to its pre-pandemic level in 2024.

Labor officials say nearly 10 million of the 22 million workers laid off by the pandemic remain unemployed.

Congress last year approved nearly $4 trillion in an array of coronavirus relief aid. President Joe Biden is proposing another $1.9 trillion in assistance to individuals and businesses, as well as for a ramped-up vaccination program, although a group of 10 Republican senators has countered with a much more limited $618 billion plan.

Biden and the Republican lawmakers are meeting on their competing plans later Monday.