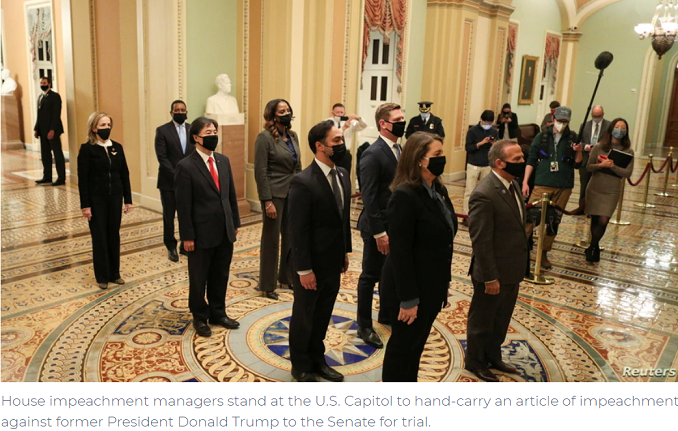 U.S. senators will be sworn in Tuesday as jurors in the impeachment trial of former President Donald Trump.

The trial itself will not begin until the week of February 8, after Democratic and Republican leaders agreed to a short delay in order to give both the lawmakers who will serve as prosecutors and Trump’s defense team time to prepare. The extra time will also allow the Senate a chance to confirm more of President Joe Biden’s Cabinet nominees.

House lawmakers who will serve as trial prosecutors made a ceremonial walk to the Senate chamber Monday evening to deliver the article of impeachment charging Trump with inciting insurrection in connection with the storming of the U.S. Capitol by a mob of his supporters earlier this month.  The assault sent lawmakers scrambling for safety and resulted in the deaths of five people.

Lead House manager Jamie Raskin from Maryland read the charges, saying Trump “gravely endangered the security of the United States and its institutions of the government.”

Trump has hired ethics and election lawyer Butch Bowers to lead his defense along with Deborah Barbier, a former federal prosecutor who works as a defense attorney specializing in white-collar crime.

Democratic Senator Patrick Leahy, who holds the largely ceremonial role of Senate president pro tempore, said Monday he will preside over the impeachment trial.  The U.S. Constitution calls for the chief justice of the Supreme Court to preside over impeachment hearings for a president, but because Trump is no longer in office, officials said Chief Justice John Roberts would not preside.

Leahy, 80, was first elected to the Senate in 1974, making him the longest-serving member. He told reporters at the Capitol his role will be “making sure that procedures are followed” and said his years in the Senate will help him to be seen as impartial.

“When presiding over an impeachment trial, the president pro tempore takes an additional special oath to do impartial justice according to the Constitution and the laws.  It is an oath that I take extraordinarily seriously,” Leahy said in a statement.

Aides to Leahy said the lawmaker will still be able to vote in the trial. Republican Senator John Cornyn criticized that arrangement on Twitter, saying, “How does a Senator preside, like a judge, and serve as juror, too?”

Cornyn also suggested Trump has already faced punishment at the ballot box, one of several arguments Republicans have made in opposition of holding the trial.

“One way in our system you get punished is losing an election,” Cornyn said.

Senator Joni Ernst, an Iowa Republican, said that while Trump “exhibited poor leadership,” it’s the people who assaulted the Capitol who “bear the responsibility.”

Senate Majority Leader Chuck Schumer, a Democrat from New York, said the Senate will conduct “a timely and fair trial.”  He dismissed Republican opposition to the process, saying the trial is “certainly and clearly constitutional.”

“There is only one question at stake. Only one question that Senators of both parties will have to answer, before God and their own conscience: is former President Trump guilty of inciting an insurrection against the United States?” Schumer said.

Democratic Senator Jeff Merkley said the Senate’s responsibility is to hear the evidence and render a judgment.

“This is about the most serious crime against the constitution one could imagine,” he tweeted.  “Every senator was a witness; every senator experienced the threat to the very foundation of our democracy. We must treat it with absolute seriousness and conduct the trial accordingly.”

A two-thirds majority in the Senate would be required to convict Trump. With the Senate politically divided between 50 Republicans and 50 Democrats, 17 Republicans would have to turn against Trump for a conviction, assuming all Democrats vote as a bloc against the former president.

Biden told the U.S.-based cable news network CNN on Monday he did not think there would be enough Republican support for a conviction.  He said the trial “has to happen,” and that there would be “a worse effect if it didn’t happen.”

At a January 6 rally near the White House, Trump repeated weeks of unfounded complaints that he had been cheated out of reelection by fraudulent votes and vote-counting even though he had lost 60 court challenges to the outcome.

He urged his supporters to march to the Capitol to fight for him in confronting members of Congress as they debated certifying Biden’s election win.

The mayhem left five people dead, including a police officer whose death is being investigated as a homicide. Trump supporters — roughly 800, according to officials — rampaged past authorities, ransacked some congressional offices and scuffled with police before order was restored and lawmakers in the early hours of January 7 officially declared Biden the winner.

If he is convicted, a separate, simple-majority vote could bar Trump from holding federal office again.

Trump stands as the only U.S. president in the country’s 245-year history to be impeached twice. The House impeached him in late 2019, accusing him of trying to enlist Ukraine to dig up dirt against Biden ahead of the November election, but the Senate acquitted him last February.