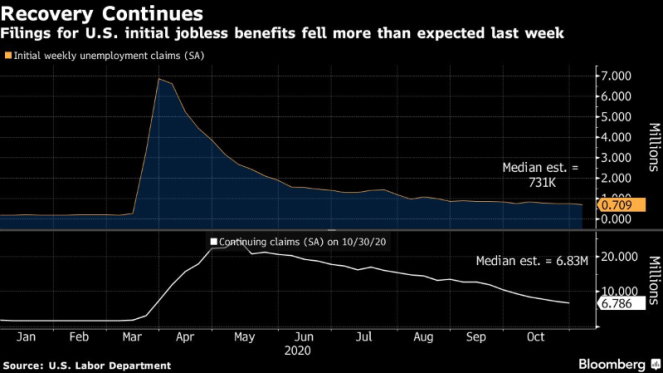 U.S. unemployment benefit claims declined again last week, the Labor Department reported Thursday, but the country’s recent surge in coronavirus cases poses a new threat to the world’s biggest economy. Seasonally adjusted, a total of 709,000 jobless workers filed new applications for unemployment compensation, down 48,000 from the revised figure of the week before. It was fourth straight week the number fell below 800,000 but remained above the highest pre-pandemic figure in records that date back to the 1960s. A total of 6.8 million workers remain unemployed, a 4.6% jobless rate for the last week of October, the Labor Department said. The figure is a marked improvement from the pandemic low point — a 14.7% jobless rate in April.

Now, however, more than 140,000 new coronavirus cases are being recorded in the U.S. on some recent days. The soaring number of new cases, as winter approaches in the U.S. and people spend less time outdoors, is forcing some state governors and municipal officials to reimpose restrictions on business operations that they had previously lifted, which could lead to more layoffs of workers in coming weeks.

About a third of unemployed workers have been without a job for 27 weeks or more, compared with 4.1% in April before the brunt of the coronavirus pandemic weighed in on the U.S. economy.

Two weeks ago, the country’s Commerce Department reported that the U.S. economy surged 7.4% from July to September. But U.S. economic growth is expected to slow in the last three months of the year, especially if business restrictions are markedly increased, such as renewed limitations on indoor seating at restaurants.

Government officials have been reluctant to curtail business activity as occurred in the March-to-June period during an earlier period of rising infections. But some consumers have shunned in-store shopping or eating in restaurants, and many entertainment events have been canceled for months, leading to continued layoffs.

Congress has reconvened after the November 3 national presidential and congressional elections. But there has been no evidence this week on movement toward a new estimated $2 trillion coronavirus relief aid package, including federal boosts to less generous state unemployment compensation.

It is not clear whether Congress and President Donald Trump, who is contesting election results showing him losing to Democrat Joe Biden, will reach agreement before he is set to leave office on January 20.

It is also uncertain what role, if any, Biden might take in shaping a relief package before he takes office.