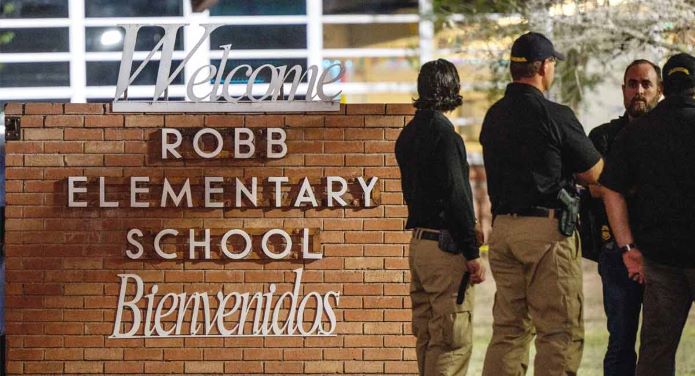 The United States was in mourning Wednesday in the aftermath of the country’s latest mass killing, a teenage gunman’s assault on an elementary school in the southwestern state of Texas that left at least 19 children and two adults dead. It was one of the deadliest rampages at a school in the country’s history.

The attack unfolded in the small city of Uvalde, where authorities said the 18-year-old gunman first shot his grandmother at her home, then crashed a car and entered the school, carrying out the shootings before law enforcement killed him.

All the victims were in the same fourth-grade classroom at Robb Elementary School, a law enforcement official told CNN.

U.S. President Joe Biden, in an emotional White House address late Tuesday, expressed condolences to the victims’ families, while questioning why mass shootings are so common in the U.S. and urging lawmakers to support what he called “common sense gun laws.”

“Why are we willing to live with this carnage?” he asked. “Why do we keep letting this happen? Where in God’s name is our backbone? When in God’s name are we going to stand up to the gun lobby?”

It was not immediately clear that the latest mass killing changed the minds of any opposition Republican lawmakers in the Senate, who in the past have blocked restrictive gun measures favored by Biden and Democratic senators.

At least 10 Republican lawmakers would need to join all 50 Democrats in the chamber to pass restrictive gun control legislation.

Some lawmakers talked of trying to reach legislative compromises that would require further background checks of gun buyers, extend the time frame for such checks or ban the sale of guns over the internet. The U.S. banned the sale of assault weapons, often used in mass killings and, according to police, deployed by the gunman in Tuesday’s attack, from 1994 to 2004. Congress then failed to renew the law.

Legislative attempts to tighten gun laws have been adamantly opposed by lobbyists for gun manufacturers and pro-gun lawmakers who cite Americans’ rights to gun ownership that is enshrined in the U.S. Constitution.

Biden said he learned about the shootings as he was returning from a trip to Asia.

Texas Department of Public Safety Sergeant Erick Estrada told CNN that officers saw the gunman leave the crashed car carrying a rifle, and that officers “engaged” the suspect, but that he was still able to get into the school.

Lydia Martinez Delgado wrote on Facebook that her niece, Eva Mireles, was a teacher at the school and among those killed.

“I’m furious that these shootings continue,” Martinez Delgado said in a statement. “These children are innocent. Rifles should not be easily available to all. This is my hometown, a small community of less than 20,000. I never imagined this would happen to especially loved ones.”

The school district’s superintendent, Hal Harrell, told reporters that grief counseling services were being made available for students and that the remaining few days of the school year were canceled.

“My heart is broken today,” Harrell said. “We’re a small community, and we’re going to need your prayers to get through this.”

A spokesman said U.N. Secretary-General Antonio Guterres “is deeply shocked and saddened by the heinous mass shooting at an elementary school in Uvalde, Texas. It is particularly heart-wrenching that most of the victims are children.”

Texas Governor Greg Abbott identified the gunman as Salvador Ramos, who attended the city’s high school. News outlets reported that law enforcement officials say he legally purchased two assault weapons days after his 18th birthday a couple weeks ago and 375 rounds of ammunition. He posted pictures of the weapons on a social media account attributed to him.

“Texans across the state are grieving for the victims of this senseless crime and for the community of Uvalde,” Abbott said in a statement.

Abbott said he and his wife, Cecilia, “mourn this horrific loss and we urge all Texans to come together to show our unwavering support to all who are suffering.”

U.S. Senator Ted Cruz of Texas echoed similar sentiments. “Today is a dark day. We’re all completely sickened and heartbroken,” he said in a statement. “We’ve seen too many of these shootings. No parent should have to bear the pain of burying their child. We need to come together, as one nation, and support Uvalde as they try to heal from this devastating loss.”

Both Abbott and Cruz were among a group of Republican figures, including former President Donald Trump, scheduled to appear Friday in Houston at the annual convention of the National Rifle Association, the gun rights group that has opposed gun control measures.

The Texas elementary school has an enrollment of about 600 students in the second, third and fourth grades and sits in a mostly residential neighborhood of modest homes. The town has a population of about 16,000 people and is the seat of government for Uvalde County. It is about 135 kilometers west of San Antonio and about 120 kilometers north of the border with Mexico.

Texas has been the scene of several mass shootings over the past five years. One year before the Santa Fe school shooting in 2018, a gunman at a Texas church killed more than two dozen people during a Sunday service in the small town of Sutherland Springs. In 2019, another gunman at a Walmart in El Paso killed 23 people in a racist attack.

Some information for this report came from The Associated Press and Reuters.