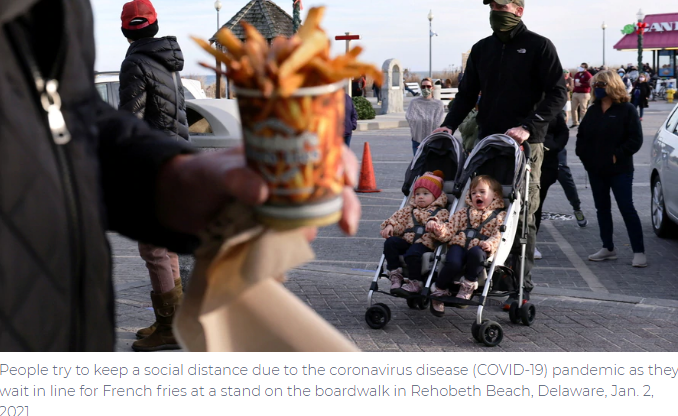 The United States has passed the milestone of 350,000 COVID-19 deaths, according to Johns Hopkins University data, even as vaccinations against the coronavirus-caused disease get off to a slow start.

As countries around the world tighten lockdowns, impose curfews, ban large get-togethers and even halt alcohol sales to tackle a surge in coronavirus cases, officials in India and the U.S. announced some progress toward expanded immunization campaigns as infections rates continued to climb on multiple continents.

New Delhi staged nationwide drills Saturday to launch one of the world’s biggest coronavirus vaccination programs as the country’s drug regulator approved two vaccines — one developed by AstraZeneca and Oxford University, the other by Bharat Biotech and the state-run Indian Council of Medical Research — for emergency use.

India, the world’s second most populous country, has more than 10.3 million confirmed COVID-19 infections, second only to the United States. Reuters reported Friday that little was known about the clinical trials that informed the emergency use authorization and that Indian officials said approval of the AstraZeneca/Oxford vaccine was “subject to multiple regulatory conditionalities,” without providing details.

In the U.S., the Centers for Disease Control and Prevention on Saturday said the country had administered more than 4.2 million doses of COVID-19 vaccines nationwide and had distributed more than 13 million doses.

The U.S. continues to lead the world with more than 20 million infections, about one-fourth of the 84.5 million COVID-19 cases globally, according to Johns Hopkins Coronavirus Resource Center, which also reported a total of more than 350,000 deaths since the pandemic began.

In Russia, Health Minister Mikhail Murashko said that more than 800,000 people had received the domestically produced Sputnik V vaccine and that 1.5 million doses had been distributed throughout the country of 147 million.

The Kremlin is pinning its hopes on mass vaccinations, not nationwide restrictions, to stop the spread of the virus and save its struggling economy from the hit of another lockdown.

Officials in Brazil, home to the third-highest number of cases globally (7.7 million), recently told The Associated Press it was at least three weeks away from launching any formal immunization campaign.

British health officials Saturday reported another infection record — more than 57,700 in a single day. It was the fifth day in a row that new infections exceeded 50,000 cases as the country struggles with the spread of a more infectious variant of the virus.

A spokesperson for Britain’s National Health Service said health workers were preparing to reopen London’s Nightingale hospitals, according to the Reuters news agency. The temporary Nightingale hospitals were set up by the military around the city and have remained on standby after receiving little use during the first wave of the pandemic.

The new strain has led to renewed lockdowns in Britain as well as global travel restrictions on travelers from Britain.

The New York Times reported Friday that at least 33 countries had detected the new coronavirus variant and more than 40 countries had barred travelers arriving from Britain. Florida on Friday was the third U.S. state to detect the new variant, after Colorado and California.

On Friday, Turkey began banning Britons from entering the country after detecting 15 cases of the new coronavirus variant. Turkey said all those affected were recent arrivals from Britain.

Ban on US travelers, tighter lockdowns

The Philippines said it would prohibit the entry of foreign travelers from the United States until at least Jan. 15 after the new coronavirus variant was detected.

In Bangkok, Thai officials shuttered the city’s nightlife with a ban on bar, nightclub and restaurant alcohol sales, among a raft of restrictions aimed at curbing the kingdom’s rising coronavirus toll. In Tokyo, the city’s governor on Saturday asked Japan’s government to declare a new state of emergency as the country battles a third wave of infections, with record numbers of new cases.

France, which recently lengthened an overnight curfew by two hours in parts of the country, has the highest COVID-19 case count in Western Europe with more than 2.7 million, according to Johns Hopkins.

France deployed more than 100,000 police to stop end-of-the-year celebrations, but partygoers in northwestern France, near Rennes, staged a massive illegal rave, leading to hundreds of arrests.

Spanish police broke up another gathering Saturday near Barcelona, where 300 people had been partying for more than 40 hours.

Ireland on Saturday reported 3,394 cases of COVID-19, nearly doubling its record for a single day. Irish officials Friday said they had underreported coronavirus cases in recent days by more than 9,000, as its reporting system came under strain.

Italy, which has the highest coronavirus death toll in Europe at nearly 75,000, Saturday reported 364 more people had died from the virus, a drop compared with Friday’s total of 462. The Guardian reported that new cases had also decreased, from 22,211 to 11,831.

Norway, with one of the lowest infection rates in Europe, Saturday began requiring COVID-19 tests upon arrival into the country, after finding five cases of the British variant of the virus. Denmark discovered 86 cases of that new, more contagious strain.

Greece has extended until Jan. 10 its strict two-month lockdown measures, ending an easing of the restrictions for the holidays.

But in Australia, the finishing touches were being put on a glitzy show at the Sydney Opera House on Saturday, as the venue prepared to host an opera crowd for the first time since March.

In Zimbabwe, where recorded cases have almost doubled since the beginning of November, government officials ordered a new containment Saturday evening. The southern African country has recorded nearly 14,500 cases to date, including 377 deaths, according to Johns Hopkins.

In South Africa, government-backed security forces stepped up a “zero-tolerance approach” to enforcing a mask mandate, and President Cyril Ramaphosa banned alcohol sales, calling it a root cause of accidents and violence that strain hospital resources.

The coronavirus has killed more than 1.8 million people globally since emerging in China in December 2019, according to Johns Hopkins.

But experts fear the worst is yet to come, predicting a sharp rise in cases and deaths after weeks of holiday gatherings.

The Associated Press, Agence France-Presse and Reuters contributed to this report.