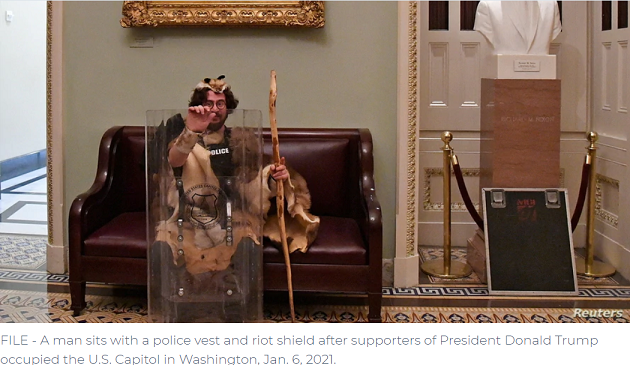 U.S. prosecutors say they have identified more than 170 people for potential criminal charges in connection with the January 6 storming of the U.S. Capitol and that they expect that number to run into the hundreds in the coming weeks as a massive nationwide hunt for the pro-Trump rioters continues.

Michael Sherwin, the acting U.S. attorney for the District of Columbia, told reporters Tuesday that more than 70 people have been charged since the deadly attack by supporters of President Donald Trump, with prosecutors pursuing charges against at least 100 others.

“That number, I suspect, is going to grow into the hundreds,” Sherwin said during a press conference at the Department of Justice.

The effort to investigate the riots and track down all those responsible is likely to drag on for months if not longer, said Sherwin, who is running the probe.

“This is going to be a long-term investigation,” he said. “Everyone is in it for the long haul.”

The attack, which left five people dead, including a Capitol Police officer and a pro-Trump supporter killed by police, has led to a Democratic push in the House of Representatives to impeach Trump for inciting the violence by urging his supporters to march on the Capitol. House members are preparing to vote on one article of impeachment on Wednesday, making Trump the only American president to be impeached twice.

Senate Democratic leader Chuck Schumer said Tuesday those who participated in the mob pose a threat to national security and should be placed on a federal no-fly list.

“We cannot allow these same insurrectionists to get on a plane and cause more violence and more damage,” Schumer said at a news conference. The New York Democrat is about the become majority leader of the Senate once his party takes control.

The FBI, which has received more than 100,000 digital tips about the incident, said it is “actively” considering the no-fly list idea.

The federal probe of the deadly breach of the Capitol is rapidly gaining in intensity, with hundreds of investigators sifting through evidence – much of it in the form of surveillance and social media videos and photographs – to identify and arrest those responsible.

To make arrests, prosecutors in some cases have relied on simple misdemeanor charges. Prosecutors, however, have the ability to indict those individuals on more serious felony charges, Sherwin said, adding that a federal grand jury on Monday heard hours of evidence presented by prosecutors.

“These are only the beginning. This is not the end,” Sherwin said of the criminal charges.

Among those charged are a West Virginia state lawmaker who filmed himself storming the Capitol, an Arkansas man who was photographed in House Speaker Nancy Pelosi’s office with his boot on a desk, and a Florida man seen in a viral photo carrying Pelosi’s lectern through the building.

Sherwin said he has set up separate “strike forces” of senior prosecutors to investigate attacks on members of the media at the Capitol and to explore sedition and conspiracy charges against some participants in the assault.

“Their only marching orders from me are to build seditious and conspiracy charges related to the most heinous acts that occurred in the Capitol,” Sherwin said of his prosecutors. “These are significant charges that have felonies with prison terms of up to 20 years.”

The rioting erupted after thousands of Trump supporters, upset by false claims that his reelection had been stolen, marched from near the White House to the Capitol where lawmakers were meeting to certify President-elect Joe Biden’s victory.

Hundreds broke into the areas connecting the Senate and House chambers of Congress, ransacking offices and scuffling with law enforcement officers, raising questions over law enforcement’s failure to secure the building.

Steven D’Antuono, assistant director in charge of the FBI’s Washington office, dismissed criticism the FBI had failed to act on warnings about planned violence in Washington. Speaking to reporters, D’Antuono confirmed that the FBI had prepared an intelligence document the day before the riots that said extremists were preparing to commit violence in the nation’s capital. He said, however, that the threat could not be traced to any specific individual.

“When my office, the Washington field office, received that information, we briefed that within 30 minutes to our law enforcement partners,” D’Antuono said. “That’s the action that we took on that.”