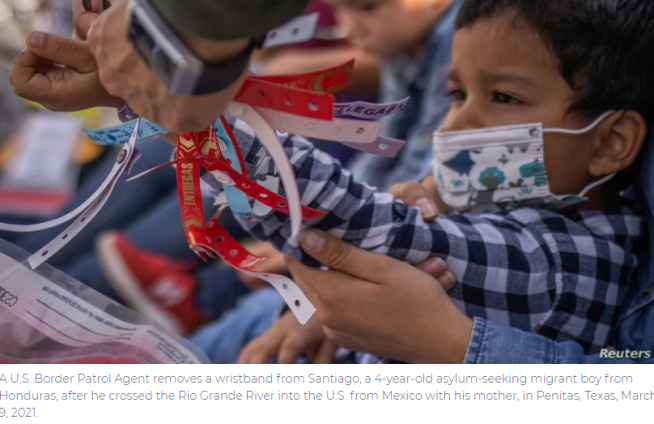 WASHINGTON – Faced with a burgeoning migration crisis on the U.S.-Mexico border, the Biden administration vowed Tuesday to continue to expel most single adults and families trying to reach the United States but to help unaccompanied children find relatives in the U.S. or place them with vetted care givers.

Homeland Security Secretary Alejandro Mayorkas said the U.S. is on pace to encounter the highest number of migrants arriving from Guatemala, Honduras, El Salvador and Mexico recorded in the past 20 years.

“The situation at the southwest border is difficult,” he said in a statement. “We will also not waver in our values and our principles as a nation. Our goal is a safe, legal, and orderly immigration system that is based on our bedrock priorities: to keep our borders secure, address the plight of children as the law requires, and enable families to be together.”

“We are both a nation of laws and a nation of immigrants,” he said. “That is one of our proudest traditions.”

The number of migrants at the border is quickly becoming an early defining moment for U.S. President Joe Biden. He stopped construction of the border wall championed by former president Donald Trump and has advanced what he says are more humanitarian immigration policies, while also continuing to reject entry for adult immigrants and families.

On Monday, Congressman Kevin McCarthy, the House minority leader, led a group of Republican lawmakers to the border at El Paso, Texas, and declared, “This crisis is created by the presidential policies of this new administration. There’s no other way to claim it than a Biden border crisis.”

Reforming U.S. immigration policies has long stymied lawmakers in Washington, with Democrats generally favoring fewer restrictions on migrants entering the country, while Republicans typically have adopted a harder line. Attempts to broker a comprehensive slate of reforms and policies have repeatedly failed in recent years.

Mayorkas said the number of migrants trying to reach the U.S. has been steadily increasing since last April, with authorities saying a new high of nearly 30,000 unaccompanied children crossed the border in February.

“We are encountering six- and seven-year-old children, for example, arriving at our border without an adult,” he said. “They are vulnerable children and we have ended the prior administration’s practice of expelling them.”

He said authorities are trying to reunite the children with family members already living in the United States or with other sponsors who have been vetted to care for them. Initially after the apprehension of the children at the border, immigration officials by law are supposed to transfer them to the Department of Health and Human Services within 72 hours, but Mayorkas said that because of the growing number of migrants, that deadline is “not always met.”

Mayorkas said poverty, high levels of violence, and corruption in Mexico and the Northern Triangle countries “have propelled migration to our southwest border for years,” but that “adverse conditions have continued to deteriorate. Two damaging hurricanes that hit Honduras and swept through the region made the living conditions there even worse, causing more children and families to flee.”

In addition, the Homeland Security chief claimed the Trump administration “completely dismantled the asylum system. The system was gutted, facilities were closed, and they cruelly expelled young children into the hands of traffickers. We have had to rebuild the entire system, including the policies and procedures required to administer the asylum laws that Congress passed long ago.”

He said the Biden administration is building additional facilities in the southwestern states of Texas and Arizona to shelter unaccompanied children, while working with Mexico to expand its ability to house expelled families.

Last weekend, Homeland Security said that for the next 90 days, the Federal Emergency Management Agency would help process the large number of unaccompanied migrant children.

In Dallas, the city convention center will be used to house as many as 3,000 migrant boys, ages 15-17, for up to 90 days starting next week, with the U.S. providing food, security and medical care.

Dallas City Manager T.C. Broadnax said in a statement that “collective action is necessary, and we will do our best to support this humanitarian effort.”

The Health and Human Services agency will also house youths in Midland, Texas, at a converted oilfield workers camp with help from the American Red Cross, which sent 60 volunteers.

Trump weighed in with his immigration thoughts at the recent Conservative Political Action Conference, contending that Biden “wants it all to go to hell.”

“When I left office just six weeks ago, we had created the most secure border in U.S. history,” Trump claimed, ignoring the increased number of illegal crossings during his last months in office.

“It took the new administration only a few weeks to turn this unprecedented accomplishment into a self-inflicted humanitarian and national security disaster by recklessly eliminating our border security measures, controls, all of the things that we put into place,” Trump argued.

Aside from dealing with the current quandary at the border, Democrats in the House of Representatives this week are trying to advance two pieces of immigration legislation.

One would establish a pathway to citizenship for undocumented immigrants who were brought to the United States as children and have lived, attended school and worked in the country since then.

The House is also considering a measure in which a migrant worker in the agricultural industry could earn temporary status to stay in the U.S. with an eventual option to become a permanent resident.

Democrats strongly support both bills and also passed them in 2019. Even if they are approved again, however, their fate in the politically divided Senate is uncertain, at best.