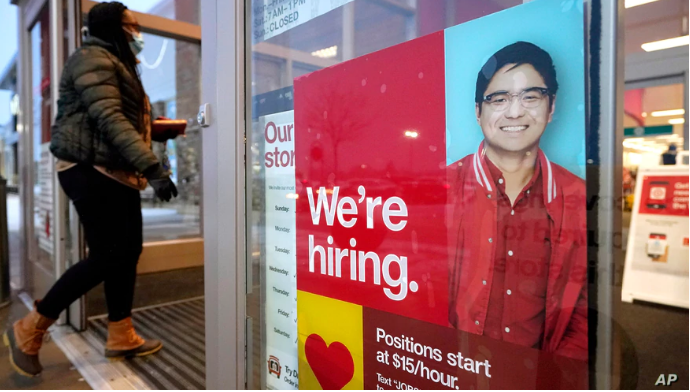 The number of people in the United States applying for unemployment benefits last week dropped slightly, the Labor Department reported Thursday, but remained historically high, despite a significant easing of a coronavirus pandemic that continues to weaken the world’s largest economy.

The government said 793,000 workers filed for benefits last week, down 19,000 from the revised figure of the previous week.

As President Joe Biden starts his fourth week in office, the U.S. economy is still facing headwinds, with tens of thousands of people being infected daily by the coronavirus, despite recent declines, and employers confronted with new orders from state and municipal officials to restrict business hours or to shut down to try to prevent the spread of the virus.

The federal government has been making $300-a-week extra payments to the jobless on top of less state benefits, a stipend that will last into March. Biden, as part of his proposed $1.9 trillion coronavirus relief package, is trying to boost that stipend to $400 a week through September. Republicans want to keep the payments at $300 and end them sooner.

Biden has narrow majorities in both the Senate and House of Representatives, possibly easing approval of his relief plan, but only if Democrats vote as a bloc or the president can convince some Republican lawmakers to support it.

The Democratic Party-controlled Congress has advanced procedural rules that would allow it to eventually approve the deal on a straight party-line vote if needed, without Republican support. But many details of the legislation are uncertain.

Biden met with both Republican and Democratic lawmakers last week to press for approval of his plan rather than a $618 billion plan advanced by Republicans. Biden relented slightly, however, saying he would agree to send only $1,400 stipends to millions of adults in the U.S. with smaller incomes than those who received assistance last year.

Nearly 10 million of the 22 million workers who lost jobs in the pandemic remain unemployed in the U.S. The jobless rate held steady at 6.7% in December and fell to 6.3% in January, with many economists saying the figure could remain elevated for months.

U.S. employers have called back millions of workers who were laid off during business shutdowns in 2020. But some hard-hit businesses have been slow to ramp up their operations again or have closed permanently, leaving workers idled or searching for new employment.

Technological advances have permanently replaced some workers, such as tollbooth collectors on highways, as state governments looked to cut costs during the pandemic.

Some state and municipal officials have imposed new restrictions on businesses, forcing owners to once again lay off workers, even as more people have received at least the first of two doses of a coronavirus vaccine.

While the U.S. economy has regained strength since the earliest days of the pandemic, the Commerce Department reported two weeks ago that growth slowed in the last three months of 2020.

It grew by 1% in the October-December period, down from a robust 7.5% advance in the previous three months.

With the sharp economic decline recorded at the height of the pandemic earlier in 2020, the U.S. economy slumped 3.5% for the year, the Commerce Department reported. By comparison, the economy gained 2.2% in 2019.

Still, the 2020 decline was not as severe as some financial experts had predicted when the coronavirus first swept into the U.S. a year ago. Now, economists are predicting an eventual rebound in 2021, particularly in the second half of the year, as millions of Americans are inoculated against COVID-19.

The U.S. has now recorded nearly 472,000 coronavirus deaths and more than 27.2 million infections, both figures higher than in any other country, according to Johns Hopkins University.

But infections, deaths and hospitalizations linked to the coronavirus in the U.S. appeared to have begun declining last month, according to federal, state and local governments, Johns Hopkins and other sources.