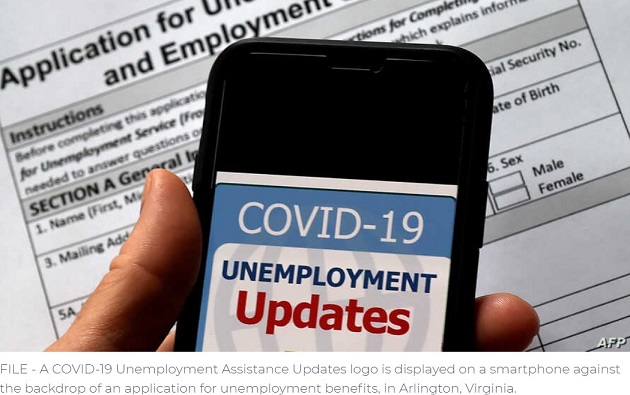 The government said 745,000 workers filed for benefits last week, up 9,000 from the revised figure of the previous week.

Employers in many states are still facing orders to curtail their operations, which can lead to layoffs for workers, even as the number of new infections has dropped sharply in the last month to about 60,000 a day from much higher figures in January.

In addition, about 1.7 million Americans are now being vaccinated against the virus each day, with President Joe Biden promising that any adult who wants a vaccination will be able to get one by the end of May.

Employers in many states, however, are still confronted with orders from state and municipal officials to restrict business hours or limit the number of customers they can serve at any one time to try to prevent the spread of the virus.

Federal Reserve chair Jerome Powell says the U.S. economic recovery is “far from complete” and that the central bank will continue to buy $120 billion worth of bonds each month to foster bank lending and consumer spending.

The House of Representatives has approved Biden’s proposed $1.9 trillion coronavirus relief measure, with passage possible soon in the Senate although many of the details remain unresolved.

The federal government has been making $300-a-week extra payments to the jobless on top of less generous state benefits, a stipend that will expire in mid-March. Biden is trying to boost that stipend to $400 a week through September. Republicans want to keep the payments at $300 and end them sooner.

The Democratic-controlled Congress has advanced procedural rules that would allow it to eventually approve the deal on a straight party-line vote if needed, without Republican support.

In the U.S., only slightly more than half of the 22 million jobs lost in the pandemic have been recovered. The jobless rate dipped to 6.3% in January, with many economists saying the figure could remain elevated for months. Economists are predicting that on Friday the government’s monthly report will show some job growth in February.

U.S. employers have called back millions of workers who were laid off during business shutdowns in 2020. But some hard-hit businesses have been slow to ramp up operations again or have closed permanently, leaving workers idled or searching for new employment.

The U.S. has now recorded 518,000 coronavirus deaths and 28.7 million infections, both figures higher than that being reported in any other country, according to Johns Hopkins University.