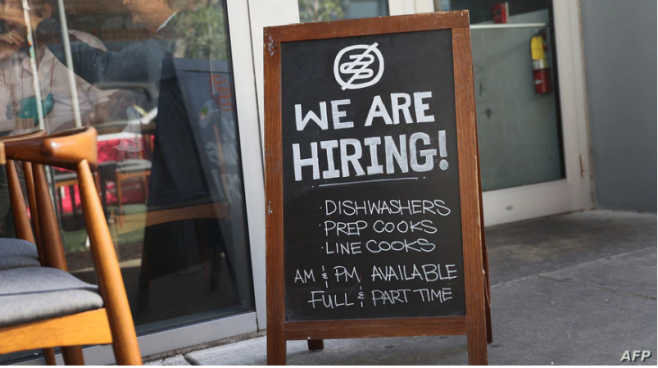 The government said 770,000 workers filed for benefits last week, up 45,000 from the revised figure of the previous week.

Employers in many states are still facing directives to curtail their operations, even as some state governors are revoking orders for people to wear face masks and allowing businesses to fully reopen.

However, the employment picture in the U.S. could improve as money from President Joe Biden’s $1.9 trillion coronavirus relief package begins to filter through the economy, legislation Democrats in Congress pushed through over uniform Republican opposition. The measure could help boost hiring and consumer spending.

About 2.4 million Americans are now being vaccinated against the virus each day, with Biden promising that any adult who wants a vaccination will be able to get one by the end of May.

More than 113 million Americans have received at least one shot of one of the three available vaccines, and as that number grows, more people are regaining a sense of normalcy in their lives.

Even so, employers in many states are still confronted with orders from state and municipal officials to restrict business hours or limit the number of customers they can serve at any one time to try to prevent the spread of COVID-19.

The Federal Reserve said Wednesday it expects the U.S. economy to grow at its fastest pace in four decades this year, with the unemployment rate falling from February’s 6.2% figure to 4.5%.

The projection was the central bank’s most favorable since the pandemic swept into the United States a year ago. It is expecting the U.S. economy to grow by 6.5% this year compared to its previous projection of 4.2%, with the growth rate slowing to 3.9% in 2022 and 3.5% in 2023.

Even with the rosier picture, Fed chair Jerome Powell cautioned that the U.S. economy will not instantly return to pre-pandemic levels.

“It’s just a lot of people who need to get back to work, and it’s not going to happen overnight,” Powell said. “The faster, the better.”

Under the $1.9 trillion relief deal, the federal government will continue making $300-a-week extra payments to the jobless into September, on top of less generous state benefits, a provision that will help millions of unemployed until their old jobs are restored, or they find new work.

In the U.S., only slightly more than half of the 22 million jobs lost in the pandemic have been recovered. But the U.S. economy added 379,000 new jobs in February, the most in four months, the government says.

U.S. employers have called back millions of workers who were laid off during business shutdowns in 2020. But some hard-hit businesses have been slow to ramp up operations again or have closed permanently, leaving workers idled or searching for new employment.

The coronavirus relief measure, however, almost certainly will give a new boost to the economy, easing the path for many employers to keep workers on their payrolls as coronavirus restrictions are gradually eased.

The U.S. has now recorded 538,000 coronavirus deaths and 29.6 million infections, both figures higher than that being reported in any other country, according to Johns Hopkins University.