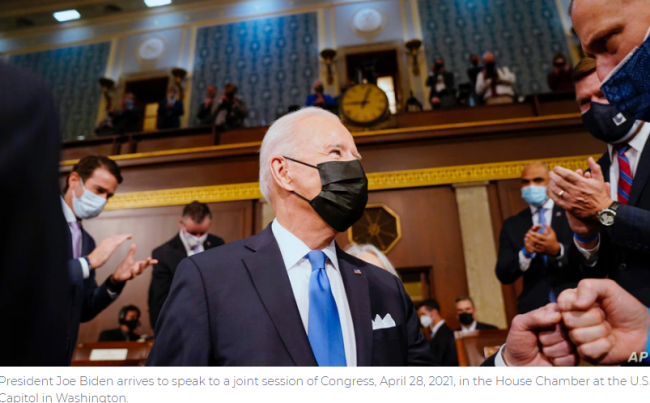 WASHINGTON – In his first 100 days as president of the United States, Joe Biden has governed less like a chief executive whose party is clinging to the barest of majorities in the House and Senate, and more like a transformative figure with a broad public mandate for societal change.

In an address to a pandemic-diminished joint session of Congress on Wednesday night, he took a further step in his effort to remake the relationship between the federal government and the American people with a $1.8 trillion proposal to expand Americans’ access to education, provide financial support to families with children, guarantee paid family and medical leave for workers, and reduce healthcare costs.

Speaking to a socially distanced audience in the House chamber, where more seats were empty than were occupied, Biden described “a once-in-a-generation investment in our families – in our children” that would help the United States in the competition with the rest of the world to “win the 21st century.”

Biden’s plans, while they poll well with the general public, are still remarkably ambitious in a country where political divisions often trump even voters’ professed policy preferences.

The proposal Biden outlined on Wednesday, called the American Families Plan, is the latest move by his administration to substantially transform the relationship between the federal government and the American people. It would be paid for by increasing tax revenue through rate hikes and stepped-up enforcement targeting wealthy tax evaders.

It follows a $1.9 trillion pandemic relief bill, the American Rescue Plan, that in addition to sending hundreds of billions in cash relief payments to individuals, also used changes in the tax law to create a monthly basic income for families with children and allowed some 800,000 additional Americans to receive health insurance through programs established by the Affordable Care Act.

Dan Mahaffee, senior vice president and director of policy at the Washington-based Center for the Study of the Presidency and Congress, said the totality of the measures Biden has signed into law and proposed in his first 100 days in office — if they were all to be enacted — would invite comparisons to other transformational chief executives, such as Franklin Delano Roosevelt and Lyndon Baines Johnson.

Should that happen, he said, Biden — whose full name is Joseph Robinette Biden — might “join FDR and LBJ as ‘JRB,’ one of the [presidents] who gets known by his initials for expanding government on the scale of the New Deal or the Great Society.”

Todd Belt, a professor at George Washington University who directs the Political Management program at the school’s Graduate School of Political Management, noted that Biden’s description of his plans in terms of their ability to help the U.S. compete on the world stage amounted to an effort to shield them from policy-related objections from Republicans in Congress.

All of that, he said, was aimed at deflecting criticism from the other side of the political aisle. Unsurprisingly, that didn’t work.

‘Even More Taxing, Even More Spending’

Republicans in Congress immediately tied the new proposal to the administration’s previous efforts, noting their combined $6 trillion price tag and expansion of the federal government’s role in American life.

“Tonight, we also heard about a so-called ‘Family Plan’ – even more taxing, even more spending, to put Washington even more in the middle of your life, from the cradle to college,” said Sen. Tim Scott, the South Carolina Republican who delivered his party’s official rebuttal to the president’s remarks.

“The beauty of the American Dream is that families get to define it for themselves,” said Scott. “We should be expanding opportunities and options for all families, not throwing money at certain issues because Democrats think they know best.”

The change in access to education is the most wide-ranging element in the American Families Plan, theoretically making two years of prekindergarten instruction and two years of community college available to all Americans free of charge.

The plan would also extend some of the financial support to families put in place by the American Rescue Plan, a bill passed earlier this year in response to the economic fallout of the coronavirus pandemic. Among other things, that bill provided families with refundable tax credits of between $3,000 and $3,600 per child paid out on a monthly basis.

It would also guarantee that, for children up to the age of 5, American families pay no more than 7% of their annual income for child care, and would guarantee up to 12 weeks of paid medical and family leave for workers.

Paid for with Tax Revenue

The proposal would cost $1.8 trillion in total, with approximately $1 trillion in direct spending, and an additional $800 billion in targeted tax relief. However, the Biden administration insists that the plan would be paid for by changes to the administration of tax laws, and would deliver large economic benefits to the nation as well.

The administration projects that an investment of $80 billion in the Internal Revenue Service’s enforcement capabilities will generate some $700 billion in increased tax revenue in the coming decade.

Janet Holtzblatt, a senior fellow at the Tax Policy Institute in Washington, called the increased funding for the IRS, which has been critically underfunded over the past decade, “a good investment.” However, she said, “The question is whether it will get back as much money as the president has claimed it will. It’s hard to say at this point because we don’t have enough information.”

Jesse Oni contributed to this report