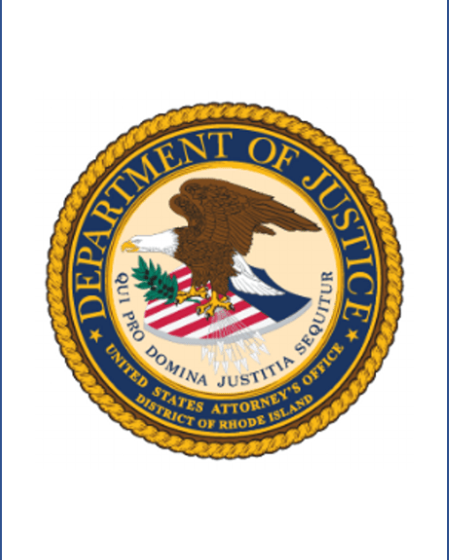 PROVIDENCE, R.I. – A Woonsocket businessman described in court documents as a “vital cog” in a tax fraud conspiracy that defrauded the United States of millions of dollars was sentenced today to three years probation, the first fifty-two weekends to be served in detention at the Donald W. Wyatt Detention Facility, announced United States Attorney Zachary A. Cunha.

Jesus Jose Mendez, 44, co-owner of J&J Drywall, Inc., a subcontracting business incorporated in Massachusetts and operating in Rhode Island, and his fugitive business partner, paid the bulk of their employees, mostly undocumented workers, cash “under the table,” skirting tax laws and unemployment programs.

According to court documents, from 2013 to 2017, Mendez and his business partner, Jamie Zambrano, 37, of Woonsocket, allegedly used check-cashing businesses to cash more than 600 business receipt checks totaling more than $16 million dollars. While under law enforcement surveillance, Mendez and Zambrano allegedly cashed checks at a Rhode Island check-casher, then travelled to construction sites carrying backpacks full of cash, which they left at the construction sites to be used to pay their employees.

During the same period, Mendez and Zambrano made just over $4 million in deposits in the business’s bank accounts, frequently structured in amounts of less than $10,000. Most of the remaining millions were allegedly used to fund a cash payroll for under-the-table laborers. With the exception of a small number of employees placed on an official payroll and paid by check, it is alleged that income and employment taxes were not withheld or paid to the IRS, and unemployment contributions were not made.

Zambrano is currently a fugitive facing an indictment charging him with conspiracy to defraud the United States (IRS); 17 counts of failure to collect and pay over taxes; tax evasion; and eight counts of structuring financial transactions to evade reporting requirements. A federal indictment is merely an accusation. A defendant is presumed innocent unless and until proven guilty.

The cases are being prosecuted by Assistant U.S. Attorney John P. McAdams.