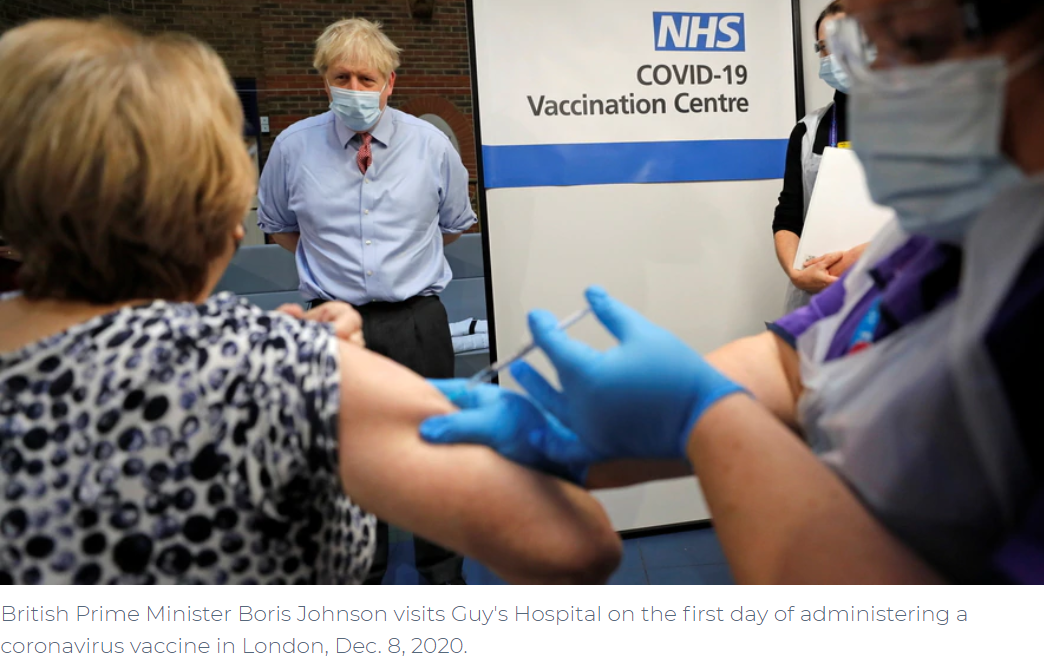 Britain has vaccinated its first citizen against the COVID-19 virus.

The approval came weeks after Pfizer announced the vaccine had been shown to be more than 90% effective after its final clinical trial.

Keenan, who will turn 91 next week, is among the thousands of nursing home residents and their caregivers, along with staffers with Britain’s National Health Service, that have been prioritized by officials to receive the first shots.

Britain received 800,000 doses of the Pfizer/BioNTech vaccine Sunday, the first of a total of 40 million it purchased from Pfizer.  Great Britain has a population of more than 66 million people. Delivery of the vaccine is complicated by the fact that it must be stored in super-cold refrigerators at temperatures below 70 degrees Celsius.

Britain has recorded more than 61,000 deaths since the start of the pandemic, one of the world’s hardest-hit countries and the worst affected country in Europe.

The start of the coronavirus vaccination campaign in Britain comes as many other nations inch closer and closer to beginning their own inoculation efforts.

The South Korean government announced Tuesday that the Pfizer/BioNTech vaccine is one of a handful it has secured for its 44 million people.  The Health Ministry says it has pre-ordered 64 million doses of vaccines under development by Pfizer, British-based pharmaceutical giant AstraZeneca, and U.S.-based drug makers Johnson & Johnson and Moderna, for 34 million South Koreans.

Seoul says another 10 million people will receive vaccines developed by Pfizer, AstraZeneca and French pharmaceutical company Sanofi and secured through the COVID-19 Vaccines Global Access Facility, or COVAX, the joint project between the World Health Organization, the Coalition for Epidemic Preparedness Innovations and Gavi, The Vaccine Alliance, an organization founded by Bill and Melinda Gates to vaccinate children in the world’s poorest countries.

Canada announced Monday it would receive its first doses of the same vaccine by the end of December.

Canadian Prime Minister Justin Trudeau said Monday that up to 249,000 doses of the vaccine would arrive this month, and 3 million are slated to be delivered early next year. Canada has a population of more than 37 million people.

But as many countries prepare to inoculate their populations, the World Health Organization (WHO) has warned against mandatory vaccinations.

While WHO officials are urging governments to persuade their citizens to get vaccinated, public health experts warn that a mandate may not be the right approach.

“I think all of us who work in public health would rather avoid that as a means for getting people vaccinated,” WHO’s emergencies director Michael Ryan told a virtual press conference Monday.

The world has more than 67.6 million total COVID-19 cases, including more than 1.5 million deaths. The United States leads the world in both categories, with 14.9 million total cases and more than 283,700 deaths, according to Johns Hopkins University.